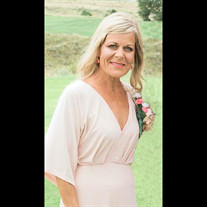 Dixie Beth Krejci was born on February 9, 1960 in Friend, Nebraska to Kenneth & LaVonne (Ruhl) Guthrie. She passed away on April 5, 2018 in Lincoln, Nebraska at the age of 58 years, 1 month, and 27 days. She was one of 4 children born in the family. Dixie was raised on a farm northeast of Exeter, Nebraska. She grew up around a vibrant neighborhood of friends and relatives throughout her upbringing. In her youth, Dixie was also very active in the Methodist Church, attending Sunday school and being a part of many different church activities. She attended Exeter Public Schools and graduated in 1978. As a student, Dixie was part of athletics, school functions, and pep club. After graduation, she married Bill Krejci on August 5, 1978. She lived in Lincoln with Bill for 3 years while he finished college. The couple then moved back to Exeter in 1980, locating on a family farm in 1983. After Dixie and Bill returned to Exeter, three children were born to the family: Jackson, Dillon, and TaLisa. In 1995, Dixie and Bill relocated to the farm where Dixie grew up as a child, and they have resided there since. Dixie loved the outdoors. She always looked forward to Spring clean-up and getting flower beds ready after the long winters and also helping Bill with the garden preparations. She and her children also loved having pets. The animals always seemed to draw near Dixie, with her meek and soft-natured presence. She also loved supporting her kids in sporting events, as it became such a big part of the Krejci family life. Dixie will always be remembered as a caring and loving individual who touched the lives of countless children as a Sunday School teacher and a para-educator at the school for nearly 23 years. She will truly be missed in the family and community. Dixie was preceded in death by her father, Kenny, father-in-law Bill Krejci, brother-in-law John Winkler, and sister-in-law Karen Pelz. She is survived by her husband, Bill of Exeter, Nebraska; sons Jackson & Alexandria Krejci and daughter Felicity and Dillon & Amanda Krejci and children Kaylee & Carter all of Lincoln, Nebraska; daughter TaLisa & Ty Brown of Hays Springs, Nebraska; mother LaVonne Guthrie of Exeter, Nebraska; brother Dan & Kris Guthrie of Lincoln, Nebraska; sisters Deb Winkler and Denise & Ken Cousino all of Lincoln, Nebraska; and nieces, nephews, cousins and friends. A Celebration of Life for Dixie was held on Saturday, April 7, 2018 at 10:30 a.m. at the Exeter-Milligan High School. Pastor Jeff Jensen officiated the service. The recorded selections “Praise You In This Storm,” “Tears In Heaven,” and “Welcome Home” were played during the service. Pallbearers for the service included Jason Dumpert, Willie Dumpert, Jeremy Becker, Logan Papik, Ben Guthrie, and Drew Winkler. Interment was held in the Exeter Cemetery following the Funeral Service. Farmer Funeral Home of Exeter conducted the services and online condolences can be left at www.farmerandsonfuneralhome.com. Memorials are suggested to the family with a future scholarship to be established in Dixie’s memory.

Dixie Beth Krejci was born on February 9, 1960 in Friend, Nebraska to Kenneth & LaVonne (Ruhl) Guthrie. She passed away on April 5, 2018 in Lincoln, Nebraska at the age of 58 years, 1 month, and 27 days. She was one of 4 children born in... View Obituary & Service Information

The family of Dixie B. Krejci created this Life Tributes page to make it easy to share your memories.