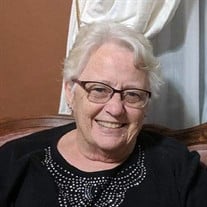 A Memorial Service for Dixie will be held on Friday, March 29, 2019, at 11:00 a.m., at the First Congregational United Church Of Christ in Geneva, Nebraska with Pastor Stuart Davis presiding. No Visitation - Cremation Private Family Burial Of Ashes at a later date. Memorials are to be directed to the First Congregational United Church Of Christ or To The Family For A Later Date. Dixie Rae Schmidt was born to Louis (Bill) South and Margaret Ilene (Gustin) South on September 19, 1943 at Guthrie Center, Iowa, and passed February 26, 2019 at Bryan East Hospital in Lincoln, Nebraska. She was one of ten children in the family. Dixie graduated from Geneva Jr. Sr. High School in 1961. She married Roger Schmidt of Fairmont, Nebraska on December 15, 1962, and to them three children were born. Roger and Dixie lived on the Schmidt family homestead where they raised their three daughters, Cindy, Tracy and Stephanie. She was a graduate of Southeast Community College, Licensed Practical Nursing Program. Dixie was a sassy, straightforward, no bullsh** lady with a quick wit and a huge heart. She cared deeply for her family and cherished time spent visiting with friends (sometimes over a bottle of wine, or perhaps a mango margarita). While she could often provide words of wisdom and comfort, she also loved to tell jokes. In recent months, she asked Emma and Abbi to record her telling jokes and requested they be played at her funeral. She did not want us crying for her loss, but laughing in her remembrance. She was a talented, self-taught seamstress. As a child, she learned to sew by making her own doll clothes. If you asked her to make you something and she couldn't find a pattern, she would just make her own. A prolific quilter, she made quilts for every resident of Heritage Crossings, where she worked for over 30 years. Some of those quilts were returned to her over the years and will be given to the homeless. After Roger's passing in 2012, Dixie purchased a home in Geneva. She was very proud of her home and her door was always open. She especially enjoyed having the grandkids stop by during school lunch break. Not much made her happier than having food ready when they made their quick, 20 minute lunch stop. What a cook she was...apple pie, fried chicken, and dressing were some of the family favorites; and don't forget her "special lemonade." There are not enough words to describe this special lady. Cherish your memories of her as we will. She was preceded in death by her father, Bill; mother, Ilene; and brother Michael (Mickey). She is survived by daughters Cindy (Larry) Chapman, of Cortland, NE, Tracy (Sal) Ramirez, of Sacramento, CA, and Stephanie (Kerry) Smith, of Fairmont, NE; Brothers Larry (Gloria) South, Jerri South, Stanley (Peggy) Palm; Sisters Becky (Glen Roesler), Gina (Joe) Jorgenson, Susan (Tom) Hume, Rhonda (Lynn) Rich, Peggy (Fred) Gebert; Grandchildren Emma Smith, Abbi Smith, Bob Smith, Ashley and Clint Foutch, Ashley Ramirez, Andrew Ramirez, Whitney Zweifel; Great-grandchildren Addison Foutch and Cora Foutch; nieces, nephews and many dear friends.

A Memorial Service for Dixie will be held on Friday, March 29, 2019, at 11:00 a.m., at the First Congregational United Church Of Christ in Geneva, Nebraska with Pastor Stuart Davis presiding. No Visitation - Cremation Private Family Burial... View Obituary & Service Information

The family of Dixie R. Schmidt created this Life Tributes page to make it easy to share your memories.

A Memorial Service for Dixie will be held on Friday, March 29,...

Send flowers to the Schmidt family.