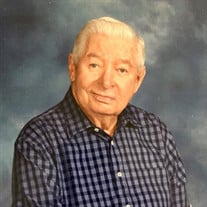 Don Leroy Petersen was born to Ray M. and Phyllis M. (Kleinschrodt) Petersen on February 28, 1936, at Friend, Nebraska, and passed away September 27, 2019, in York, Nebraska at the age of 83 years, 6 months, 27 days. He was the oldest of two children. Don graduated from Exeter High School in 1953, and then attended Milford Trade School. He served in the US Army, 3rd Armored Division, 1955-1957, stationed in Germany as a medic, and enjoyed his travels while there. Don was married to Jayne Erdkamp on December 27, 1957, and to them, four children were born; Danny, Kim, Jon, and Tommy. The couple first lived on a farm north of Cordova for 4 years before moving to their longtime home west of Cordova. Don spent his life doing what he loved best, farming. He enjoyed deer hunting and always looked forward to opening day. He also loved attending church and Sunday School. Family meant everything to Don and no matter how busy he was, he always took time to enjoy his children and grandchildren and was a wonderful, patient teacher to them. Don loved harvest season and still looked forward to operating the grain cart as well as helping with spring planting. He prided himself on his straight rows, even without GPS. Though he was retired, he jokingly made sure everyone knew he was still “The Boss”. As a boy, Don was active in Boy Scouts and spent two summers at Philmont Scout Ranch in New Mexico. He loved to tell stories about his childhood. His favorite story was about the barnstormer who landed his plane in a nearby field and gave him a ride, at the age of 8, without his parents knowledge. Don attended as many of his children’s and grandchildren’s school and sporting events as he could and he was very proud of his 7 great grandchildren as well. Don was preceded in death by his parents Ray and Phyllis Petersen; his sister Donna Jasinski; and his parents-in-law Leonard and Eleanor Erdkamp. He is survived by his wife, Jayne; his children, Danny Petersen of rural Exeter, Kim (John) Krolikowski of Albuquerque, New Mexico, Jon (Cynthia) Petersen of Robins, Iowa, Tommy (Angela) Petersen of Cordova; nine grandchildren, Molly Krolikowski, Preston (Michelle) Petersen, Samantha Krolikowski, Kellen (Nicole) Petersen, Whitney (Bryan) Bybee, Austin (Jamie) Petersen, Luke Petersen, Emily Petersen, Paige Petersen; seven great grandchildren, Maddox, Zuri, and Ella Petersen, Dominic Krolikowski, Everett and Emmett Bybee, and Owen Petersen; brothers-in-law Henry Jasinski, Lawrence (Sue) Erdkamp, John (Cheri) Erdkamp, James (Mary Beth) Erdkamp; sister-in-law Mary Dinneen; many nephews, nieces, cousins, and friends. A Funeral Service for Don was held on Thursday, October 3, 2019 at 11:00 a.m. at St. John’s Lutheran Church in Cordova, Nebraska. Pastor Brian Tuma officiated the service. Blake & Andrea Woodburn accompanied the congregation in the singing of “Beautiful Savior,” “Wonderful Merciful Savior,” and “Blessed Assurance.” Pallbearers for the service included Preston Petersen, Kellen Petersen, Austin Petersen, Luke Petersen, Scott Jasinski, William Sladek, Bryan Bybee, and Larry Erdkamp, Jr. Interment was held in the Exeter Cemetery with Military Flag Presentation performed by Don’s brother-in-law, Larry Erdkamp. Farmer & Son Funeral Home was in care of the arrangements and online condolences can be left at www.farmerandsonfuneralhome.com Memorials are suggested to the Orphan Grain Train or the St. John’s Lutheran Church in Cordova.

Don Leroy Petersen was born to Ray M. and Phyllis M. (Kleinschrodt) Petersen on February 28, 1936, at Friend, Nebraska, and passed away September 27, 2019, in York, Nebraska at the age of 83 years, 6 months, 27 days. He was the oldest of two... View Obituary & Service Information

The family of Don L. Petersen created this Life Tributes page to make it easy to share your memories.

Send flowers to the Petersen family.