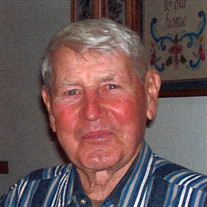 A Memorial Service for Don will be held on Thursday, October 19, 2017 at 11:00 a.m. at the United Methodist Church in Geneva, Nebraska with Pastor Michelle Gowin officiating. Visitation will be held on Wednesday, October 18, 2017 from 4:00 p.m. until 8:00 p.m. with the family present from 5:00 p.m. until 7:00 p.m. at Farmer & Son Funeral Home in Geneva, Nebraska. Private Military Graveside Service will be held in the Ong Cemetery in Ong, Nebraska. Memorials are to be directed to the family for a later designation. Don Larry Williams was born on April 17, 1930 to Frank and Estella (Fayle) Williams at the hospital in Hastings, NE. Don passed away October 15, 2017 at Fairview Nursing Home in Fairmont, NE at the age of 87. He was the younger of two children. Don enlisted and served in the Navy in 1948, serving his tour of duty and 6 years in the reserve. He was very proud to have served on the USS aircraft carrier Valley Forge. He was a longtime member of the Shickley American Legion Post 164. Don married Donna Rose Andersen on December 28, 1952 at the Methodist Church in Ong, Ne. To this union one daughter, Cindy, and three sons, Barton, Randy and Brad were born. Don and Donna lived all of their married life on their farm in rural Davenport, NE. Don was a farmer his entire life. Don gave a lot of time to civic duties; he served on the Ong school board, NRD board of Directors and Nebraska Wildlife Federation for many years. He loved the outdoors and was an extremely avid and talented hunter and fisherman. He was a dedicated conversationalist, the number of trees he planted would be hard to count, and the amount of wildlife in and around his farm yet to this day is a direct result of his efforts and sacrifice. When other farmers were tearing out the habitat to get more farmland, he was increasing it by planting trees or crops left for wildlife. Don took great pleasure in passing on his love of the outdoors and his knowledge of hunting and fishing to his children and grandchildren. Don and Donna loved to travel, and spent winters in Rockport, TX for over 30 years. They visited a lot of the country in their various travel trailers and campers. Don’s hunting and fishing trips took him across much of the United States and Canada. Don is preceded in death by his wife Donna Williams, his parents Frank and Estella Williams, his brother Marvin Williams, and his son Barton Williams. He will be greatly missed by his survivors including: Children Cindy Williams, Randy (Penny) Williams, and Brad (Barb) Williams. Grandchildren are Perry (Deanna) Gunn, Nathan (Katie) Michels, Jesse (Teresa) Williams, Laura (John) Reed, Seth (Micaela) Williams, and Cole Williams; 6 Great Grandchildren, and many friends and family.

The family of Don L. Williams created this Life Tributes page to make it easy to share your memories.

A Memorial Service for Don will be held on Thursday, October...

Send flowers to the Williams family.