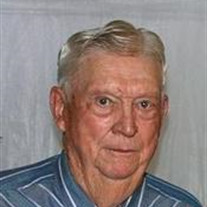 Our Savior Jesus Christ has destroyed death and brought life and immortality to light through the Gospel. Let us remember with thanksgiving what God has done through His servant, Donald. Donald Edmund Bartels, son of John Bartels, Sr. and Amalia Endorf Bartels, was born in Fairbury on August 31, 1926. He was baptized on September 12, 1926 at Zion Lutheran Church of Tobias by the Rev. E.O. Potratz. Donald received the Rite of Confirmation on March 17, 1940 at Zion Lutheran Church of Tobias, by the Rev. William Nau. His confirmation verse was Psalm 27:1. He was admitted to the altar to receive the medicine of immortality, Christ’s life-giving body and blood. During the Korean Conflict Donald was drafted into the Army, serving as a heavy equipment operator, achieving the rank of Staff Sargent. Donald was joined together in holy matrimony to Marlene Hamouz on December 27, 1953, at Zion Lutheran Church of Tobias, Nebraska. God raised through this union four children, Suzanne Marlene, Donald Jon, Douglas James, and Daniel Jay. On June 14, 2013, at the age of 86 years, Donald fell asleep in Jesus at the Good Samaritan Society in Beatrice. He is survived by his children; daughter, Suzanne Bartels Munn and husband Myron of Beatrice; sons Donald Jon and wife Vicki of Tobias, Douglas and wife Anita of DeWitt, and Daniel and wife Sonja of Bennet and their mother, Marlene (Fred) Gakle; 8 grandchildren, Laura Amalia Suzanne Munn, Neal Wade Bartels, Logan Jon Bartels, Evan George Bartels, Desiree Rose Bartels, Eric Douglas Bartels, Emily Danielle Young and husband Jeremy, Daniel Ross Bartels. Brother Bernard and wife Viola of Grand Island. Numerous nieces, nephews, cousins, friends and his beloved German Shepherd Max. Donald is predeceased by his parents, infant brother, brother Walter (Genevieve), sisters Helen (Otto) Nolte, Erna (Henry) Schoenbeck and Lucile (Walter) Nun. Amanda Brunkow (who came to care for the family when Donald was 13 and remained 46 years until her passing in 1985). Brother-in-law Donald Hamouz. Companion Darlene Diekmann. When his brother Bernard (BJ) served in World War II, Donald had to leave school at the 10th grade to help on the family farm. In December of 1981, he received his GED. This was an accomplishment of which he was very proud. He also received some agricultural education thru the GI bill when he returned from Korea. In 1985 Donald’s farm was recognized for being in his family for 100 years as an Aksarben Pioneer Farm. Funeral services were 10 a.m. Tuesday, June 18, 2013, Zion Lutheran Church, Tobias, Nebraska. With Pastor Paul Beyer officiating the service. Jerry Brueggeman accompanied the congregation in the singing of “From All That Dwells Below The Skies,” “Guide Me, O Thou Great Redeemer,” “The Lord’s My Shepherd I’ll Not Want,” and “Rejoice, My Heart, Be Glad & Sing.” Pallbearers for the service included Eric Bartels, Neal Bartels, Logan Bartels, Even Bartels, Mark Bartels, and Randy Meyer. Honorary bearers included Emily Young, Desiree Bartels, Laura Munn, and Daniel Ross Bartels. Military graveside services were held at the Tobias City Cemetery with Rites performed by the Tobias American Legion Post 311 Memorials to the family to be designated later. Precious in the sight of the Lord is the death of His saints. Psalm 116:15 The Lord gives and the Lord takes away; blessed be the name of the Lord. We give thanks to God our Father through Jesus Christ, our Lord, for our brother, Donald.

Our Savior Jesus Christ has destroyed death and brought life and immortality to light through the Gospel. Let us remember with thanksgiving what God has done through His servant, Donald. Donald Edmund Bartels, son of John Bartels, Sr.... View Obituary & Service Information

The family of Donald E. Bartels created this Life Tributes page to make it easy to share your memories.

Our Savior Jesus Christ has destroyed death and brought life...