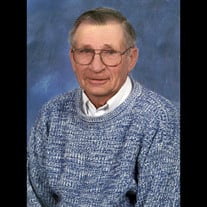 Donald Martin Endorf was born to Henry Christian Endorf and Edna (Bartels) Endorf on November 10, 1938 at Tobias, Nebraska, and passed away on August 22, 2018 at Warren Memorial Hospital in Friend, Nebraska at the age of 79 years, 9 months, and 12 days. He was one of 4 children born in the family. Don grew up in rural Western and Tobias. He went to Zion Lutheran School until 8th grade and graduated from Western High School in 1956. Upon high school graduation, Don joined the Marine Corp and served two years from 1956 to 1958. He then returned to the farm working with his father until the 1970s. He then farmed on his own until 1985 until he began farming for the G&K Holtmeier Family until his retirement. Don was married to Mary Jayne Amend of Lincoln, Nebraska on August 11, 1963. Three children were born to this union: Kevin, Jeffrey and Susan. They recently celebrated 55 years of marriage. Farming was not the only thing that consumed Don’s time. He also enjoyed playing fast pitch softball. He was known to be a pretty good pitcher. He also enjoyed playing cards, bowling, local sporting events, and collecting coins, toy fire trucks, and butter churns and served many years with the Tobias American Legion Post 311. Don served many roles and was involved in many committees within the Zion Lutheran Church. He also served many years on the Zion Lutheran School Board. Don was preceded in death by his parents Henry and Edna; brothers Loren Endorf, Norman Endorf and wife Betty, Weldon Endorf and first wife Jackie; father-in-law and mothers-in-law John and Martha Amend and Antha Amend. He is survived by his wife of 55 years, Mary; sons Kevin Endorf and wife, Charlotte of Hadar, Nebraska, Jeff Endorf of Columbus, Nebraska; daughter Susan Jones and husband Evan of Western, Nebraska; grandchildren Megan and Amber Endorf of Columbus, Nebraska; Samantha Aldrich of Lincoln, Nebraska, Danielle Aldrich of Missouri, Cassandra Aldrich and husband Matthew Berg of North Platte, Nebraska, Anastasia Aldrich of Western, Nebraska, Gabriel Jones of Western, Nebraska, Spencer Endorf and wife Brittany of O’Neill, Nebraska, Sarah Doty and husband Cory of Plainview, Nebraska; great-grandchildren Jace Berg of North Platte, Nebraska, Gunnar Doty of Plainview, Nebraska, Zavier Miller of Iowa; and numerous nieces, nephews, cousins and friends. A Funeral Service for Don was held on Monday, August 27, 2018 at 10:30 a.m. at Zion Lutheran Church, rural Tobias, Nebraska. Pastor Gideon Pullmann officiated the service. Janile Campbell accompanied the congregation in the singing of “I Know That My Redeemer Lives,” “What A Friend We Have In Jesus,” and “I Am But A Stranger Here.” Pallbearers for the service included Ryan Holtmeier, Spencer Endorf, Cory Doty, Matthew Berg, and Glen Endorf. Honorary Pallbearer was Gaylen Endorf. Interment was held in the Zion Lutheran Cemetery with Military Rites performed by the Tobias American Legion Post 311. Farmer & Son Funeral Home was in care of the arrangements and online condolences can be left at www.farmerandsonfuneralhome.com. Memorials are suggested to the Zion Lutheran Church.

Donald Martin Endorf was born to Henry Christian Endorf and Edna (Bartels) Endorf on November 10, 1938 at Tobias, Nebraska, and passed away on August 22, 2018 at Warren Memorial Hospital in Friend, Nebraska at the age of 79 years, 9 months,... View Obituary & Service Information

The family of Donald M. Endorf created this Life Tributes page to make it easy to share your memories.

Send flowers to the Endorf family.