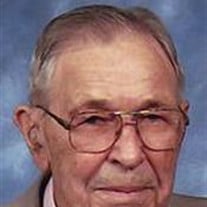 Donald E. Kuska, 95, a resident of Bettendorf, Iowa died on Thursday, April 7, 2011 at Trinity Bettendorf.    A funeral service to celebrate his life will be held at 2:00 P.M. Tuesday, April 12, 2011 at Asbury United Methodist Church of Bettendorf where he was a longtime and faithful member. Visitation will be from 5:00 P.M. to 7:00 P.M. Monday at the McGinnis-Chambers Funeral Home of Bettendorf where a Masonic service will be conducted at 7:00 P.M. Additional visitation will be held from 10:00 A.M. to 11:00 A.M. Thursday, April 14, 2011 at the Farmer Funeral Home in Milligan, Nebraska. A graveside service will follow at 11:30 A.M. at the Bohemian National Cemetery, Milligan. Memorials may be made to Asbury United Methodist Church, the Iowa Masonic Health Facility of Bettendorf or the family for the great-grandchildren’s education.    He was born June 12, 1915 in Fillmore County, Nebraska, the son of Emil Anton & Katherine (Becwar) Kuska and was a graduate of the University of Nebraska.  On June 1, 1940, he was united in marriage to Camille M. Conger in Lincoln, Nebraska. She preceded him in death on July 15, 2009.    Don was employed as an engineer for the J.I. Case Company of Bettendorf from 1971 until his retirement in 1983. In earlier years, he was the Chief Engineer for the Oliver Corporation of South Bend, Indiana from 1950 to 1971.    In addition to the church, he was a member of Hamilton Masonic Lodge, #664 of Bettendorf, the Davenport Scottish Rite, the Hi-Twelve Club where he was past-president, the Society of Automotive Engineers and the American Society of Agricultural engineers where he received an award for 75 years of membership.    Those left to honor his memory include his daughter, Cindy Buchman of Bettendorf; his grandchildren, Dominick Marcott, Danielle (Brian) Temple, Aaron (Heather) Buchman and Jennifer Buchman; his great-grandchildren, Adelynn & Avery Temple, Charlie Camille Buchman and Kira & Maximus Marcott; along with other relatives and many wonderful friends.    In addition to his wife, Don was preceded in death by his daughter, Sherry Potenzo in 1990 and his brothers, Melvin & William.

Donald E. Kuska, 95, a resident of Bettendorf, Iowa died on Thursday, April 7, 2011 at Trinity Bettendorf.    A funeral service to celebrate his life will be held at 2:00 P.M. Tuesday, April 12, 2011 at Asbury United Methodist Church of Bettendorf... View Obituary & Service Information

The family of Donald E. Kuska created this Life Tributes page to make it easy to share your memories.