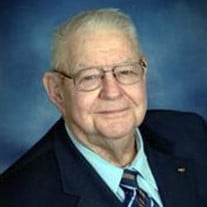 Donald Roy Miller   “Howdy, Howdy, Howdy - It’s A Great Day In Nebraska.” It was a great day in Nebraska when Donald Roy Miller, son of C. Howard and Margurete Bell (Reemts) Miller, was born on February 5, 1935, at his grandparents Roy C. and Bessie (Brower) Miller’s home two miles south of Geneva. His mother waited to name him until his father arrived home from his job constructing bridges between Exeter and Friend. Soon after, the family moved to a farm seven miles northwest of Geneva. Don was baptized on April 12, 1936, and confirmed March 21, 1948, at the United Methodist Church in Geneva. He attended country school District #81 two miles south of their home, riding his pony “Lady” to school. In 1943 during WWII, the government needed their farm for a rifle range, so they moved across the road one half mile north.  Don then attended District #11, one and a half miles north of their home, through 7th grade.  He continued his education at Geneva Public School, graduating with the class of 1952. He would drive their 1947 Ford to school while his sister Joann dried her hair out the window of the car. In high school he lettered four years in football and track.  He shared that he and Dale Richards would eat doughnuts before running.  Don was chosen King of the 1952 Spring Festival.  He attended NE Wesleyan for one week and then transferred to the University of NE for one semester.  His favorite class was meat cutting.  Don’s father needed his help on the farm, so Don said to his high school sweetheart, Kathryn Sue Ewalt, “Why don’t we get married and get to farming?” Their 60-year marriage and partnership began on October 18, 1953, at the United Methodist Church in Geneva.  They were blessed with three children, Debra Kay, Max Howard, and Jan Elizabeth.  He loved farming, boating, camping, golfing, hunting, fishing, NU football games, cooking and grilling, playing pitch, state basketball tournaments and just visiting with people. In 1982 Don and Kay moved to their present home in Geneva.  As their family grew, they enjoyed family gatherings and their grandchildren’s activities. Don and Kay enjoyed many trips throughout the country, but nothing compared to the love they shared at home with family and friends. Don was a lifetime member of the United Methodist Church, 50-year member of the Geneva Masonic Lodge and Sesostris Shrine, 45-year member of the Geneva Lions Club, and a member of the Geneva School Board, Exeter Feeder and Breeders Assoc, and Ducks Unlimited. Don was honest, trustworthy, and a man of his word. He was straightforward—right was right and wrong was wrong. He cared for others and was a solid rock for family and friends. Welcoming Don in heaven are his parents C. Howard and Margurete Miller, daughter Debra Kay, grandson Shawn, brother in-law Robert Ewalt and wife Ellen, and many other friends and family. Continuing life’s journey are his wife Kay, son Max and wife Sharon (O’Brien) Miller, daughter Jan and husband Pat O’Brien, grandchildren Allison and Bob Vega, J J and Rachel Krull, Andrea and Kelby Nitz, Margie, Mark and Matthew Miller, Alex and Nolan O’Brien, great-grandchildren Zachary Vega, Moriah Krull, and Ava Nitz, sister Joann Curtiss and husband Charlie, and many devoted family and friends. Don greeted people saying, “It’s a great day in NE,” and parted with, “Hope you have a good day.” This greeting is now being heard in heaven. Donald R. Miller’s Celebration of Life was held at Geneva United Methodist Church on Saturday, February 8, 2014, at 2:00 p.m. Pastor Ron Harris officiated and provided the comforting message using scripture from Mark 5:21-43. Musical selections that were chosen in honor of Don were “Shine, Jesus Shine;” “When I Get Where I’m Going;” “Love Without End, Amen;” “Waitin’ on a Woman” and video; and “The Tunnel Walk.”   Reinforcing Don’s love of farming was Paul Harvey’s video, “On the Eighth Day God Created Farmers.” Members of the Geneva Masonic Lodge #79 gave a Masonic tribute. Escorting Don to his final resting place at the Geneva Public Cemetery were his Grandchildren, Allison (Bob) Vega, JJ (Rachel) Krull, Andrea (Kelby) Nitz, Margie, Mark, and Matthew Miller, Alex and Nolan O’Brien and honorary heavenly assistant Shawn Patrick O’Brien. The grandchildren each wore a hat that had been worn by their Grandpa. After Don’s final blessing, red and white balloons were released to “When I get that Honeymoon Feeling,” a memory-filled song for the family.   Family and friends returned to the Fussell Fellowship Hall for a catered meal by Jill’s Sweet Shop.  Assisting at the meal were the Geneva United Methodist Women and the Geneva St. Joseph’s Catholic Altar Society.  Farmer and Son Funeral Home directed the Celebration of Life tribute.

The family of Donald R. Miller created this Life Tributes page to make it easy to share your memories.