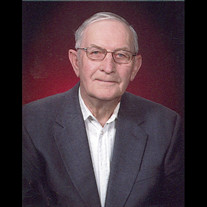 Donald Frank Nun was born on Nov. 11, 1932, to Frank and Elizabeth (Nedza) Nun at Ohiowa, Nebraska. He was the oldest of three children. Don was baptized into the Lutheran faith at Saint John’s Lutheran Church in Ohiowa as an adult, along with his sister, Mary, and brother, Russell. He graduated from Ohiowa High School in 1950. Don attended Lincoln School of Commerce, before he was drafted and entered the United States Army on Feb. 12, 1953. He completed basic training at Fort Riley, KS, before shipping to South Korea, where he served on a peace keeping mission. He returned to Fort Carson, CO, and was released from active duty on Feb. 4, 1955. Don completed his military service after serving in the Army Reserve on Feb. 4, 1961. During his military service, he earned the Korean Service Medal, the United Nations Service Medal, the National Defense Service Medal, the Good Conduct Medal, and a Third Infantry Division Non-Commissioned Officers Academy Certificate of Proficiency. He attended Veterans School in Tobias before taking up a career in farming. Don was united in marriage to Shirley Lou Schroeder on Aug. 11, 1957, at Grace Lutheran Church south of Ohiowa. The couple settled on a farm in Chelsea Township, where they raised their four children, Sherri Kay, Donna Lyn, Larry Scot and Danny Lee. Tragedy struck the family with the death of Donna in 1983. Don and Shirley moved to a home on Eighth Street in Geneva in the mid 90s, where they lived several years before moving to their H Street home. Don was the “main cook and bottle washer” while Shirley struggled with cancer before passing away in 2010. Don was passionate about his farming, his faith and his family. He was truly a “Red Man,” dedicated to International tractors, Massey combines and Husker sports. He only strayed to the blue side when his Royals baseball team was playing. Don refused to drive anything besides Chrysler vehicles, following in his own father’s footsteps. He enjoyed his time with long-time friend and neighbor, Joe Kaderabek. The two were often found together drinking coffee, smoking and “chewing the fat.” Don was preceded in death by his parents, Frank and Elizabeth; wife, Shirley; daughter, Donna; sister, Mary; and brother-in-law, Wayne Moss. Left to celebrate his life are children Sherri, Geneva; Larry and Darcy (Riddle) Nun, Geneva; and Danny and Kristin (Klover) Nun, Ohiowa; grandchildren Christian Scollon-Nun, Brevann, Marissa, Tanner and Conner Nun; brother and sister-in-law, Russel and Barb Nun, Westminster, CO; sister-in-law Sharolyn Moss, Grand Island; brother-in-law, Richard Zimmerman, Fairbury; aunt, Bessie Wulf, Ohiowa; and many cousins, nieces, nephews and friends. Funeral services for Don were held at St. John’s Lutheran Church at 10:30 a.m. on Thursday, Oct. 11, 2017. Services were officiated by PMA Jim Germer, Pastors Del Klover and Bill Triebe, 3 of Don’s “Club of Five” pastors. Nancy Cradduck accompanied the congregation in the singing of “The Old Rugged Cross,” “What A Friend We Have In Jesus,” “Amazing Grace,” and “Lift High The Cross.” Pallbearers included Charles Nedza, Richard Nun, Clair Christiancy, Paul O’Brien, Steve Ozenbaugh, Tom Nun, Steve Zimmerman and Bob Wulf. Honorary pallbearers were Don’s grandchildren. Interment was held at the Ohiowa Cemetery, where he was buried next to his wife and daughter. Military Rites at the cemetery were performed by the Ohiowa American Legion Post 193 and the Nebraska Military Honor Guard. Farmer & Son Funeral Home conducted the services, and online condolences can be left at www.farmerandsonfuneralhome.com. Memorials are suggested to St. John’s Lutheran Church or Morrison Cancer Center at Mary Lanning Hospital.

Donald Frank Nun was born on Nov. 11, 1932, to Frank and Elizabeth (Nedza) Nun at Ohiowa, Nebraska. He was the oldest of three children. Don was baptized into the Lutheran faith at Saint John&#8217;s Lutheran Church in Ohiowa as an adult,... View Obituary & Service Information

The family of Donald F. Nun created this Life Tributes page to make it easy to share your memories.

Send flowers to the Nun family.