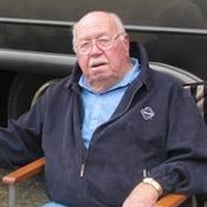 Memorial services for Don will be held on Saturday, May 11, 2013 at 10:30 a.m. at the Evangelical Free Church in Geneva. Pastor Jeff Jensen will be officiating the service. Private Military graveside services will be held at the Geneva Public Cemetery prior to the Memorial Service. Donald Howard Wilkins 87, of Bella Vista, Arkansas passed away peacefully on April 11, 2013 in Fayetteville, Arkansas. Born in Martland, Nebraska to William and Ruth (Davis) Wilkins on August 30th, 1925 While attending Geneva High School, Don answered his country's call for service and joined the United States Navy in 1942 at the age of 17. After the war, Don was discharged in 1945 at which time he married his bride Katherine Watson. Together they made a home and a life together while raising their five children. Retired from the construction industry Don enjoyed playing cards and golfing but his passion was traveling the highways and byways behind the wheel of his Lincoln Town Car. Don is survived by Sons: David (Kathy) Wilkins, Dennis (Linda Peterson ) Wilkins all of Bella Vista, Arkansas, Charles (Kami) Wilkins Olympia, Washington; Daughters: Kimberly Raney, Tamara Salinas, of Omaha Nebraska, his sister, Marian Myers of Geneva, Nebraska, sisters-in-law, Donna Wilkins of Geneva, Nebraska; Evelyn Mosley and Carol Lueke, both of St. Charles, Missouri, and brother-in-law, Walter Watson of St. Charles, Missouri; and many nieces and nephews. Don will be remembered for his strong presence, gentle spirit and his unwavering work ethic, but his lasting legacy are his 14 Grandchildren, 16 Great-grandchildren. Don was preceded in death by wife: Katherine, Grandson Daniel, Granddaughter Ashley, and beloved brother and sisters. In lieu of flowers/Memorials to: Veterans Health Care System of the Ozarks, Attn: Palliative Care Services-Hero's Haven Hospice, 1100 North College Ave, Fayetteville, Arkansas 72703. Please make checks payable to Palliative Care Services.

Memorial services for Don will be held on Saturday, May 11, 2013 at 10:30 a.m. at the Evangelical Free Church in Geneva. Pastor Jeff Jensen will be officiating the service. Private Military graveside services will be held at the Geneva... View Obituary & Service Information

The family of Donald H. Wilkins created this Life Tributes page to make it easy to share your memories.