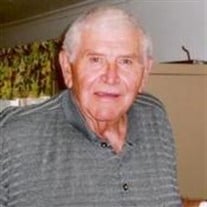 Donaven George “Barney” Bornschlegl was born January 22, 1931, in Ohiowa, Nebraska to George and Lillie Bornschlegl. He passed away on Monday, April 15, 2013 in Lincoln, Nebraska at the age of 82 years, 2 months, and 23 days. He was one of 2 children in the family. After Graduating from Ohiowa High School, he attended Peru State College where he was a standout athlete in basketball and baseball. He is still on Peru State’s scoring record charts. In 1951, he met an auburn haired beauty from Fairbury, Nebraska, Patricia Lee McKay, who was also attending Peru State College. They were married February 3, 1952. Don and Pat were blessed with 6 children. Jeffrey (1952), Dirk (1953 – Deceased 1973), Eric (1956), Andrea (1957), Fletcher (1960) and Garth (1965). Don Graduated from Peru State College with a Bachelor’s in Education. He was immediately drafted into the U.S. Army during the Korean War. For his two year tour of duty he was sent to Berlin, Germany. While stationed in Germany he made the post basketball and baseball teams and played throughout Europe against other U.S. military teams and Berlin’s professional teams. When he wasn’t playing sports while in the army, his military occupational specialty was an MP, military policeman. When he was honorably discharged, he hurried home to his family, Pat, Jeff and Dirk. Donavan had many careers in Nebraska including teaching and coaching basketball and football at Plymouth High School, Neligh High School and Norfolk High School. He was a winning coach as well as a beloved teacher and mentor. Many former players continued to visit Barney for many years. In 1960, they moved from Norfolk to North Platte, Nebraska, where Don was an insurance agent. The family moved to Gothenburg in 1968, where he continued to work in the insurance business. He changed his career path when he purchased and ran the Gothenburg Bowling Alley until they moved to Gering in 1977. He was an insurance agent and built a few homes while in the Gering/Scottsbluff area. They moved to Geneva in 2002 to retire.....Not. His idea of relaxing was to remodel old homes which is what he and Pat loved to do. Donaven was a good friend to anyone he met. We fondly remember his favorite catch phrases such as “I’ll be go to grass,” “baloney sauce,” and “go get me the whatchamacallit.” He loved the TV show “Maxwell Smart” which made him laugh along with his accident-prone friend Tom O’Connor. His 19 grandchildren and 3 great grandchildren were so very important to him. They could do no wrong and he took great pride in whatever they did. Dad always said he had an amazing life and I’m the luckiest man alive. Donaven was preceded in death by his wife Pat (2011), son Donavan Dirk (1973), and parents George and Lillie Bornschlegl of Ohiowa. He is survived by his children Jeff Bornschlegl of Davenport, Iowa, Eric & wife D’Mor Bornschlegl of Pickerington, Ohio, Andrea & husband David Schwartz of Lincoln, Nebraska, Fletcher Bornschlegl of Fort Worth, Texas, Garth & wife Angela Bornschlegl of Lincoln, Nebraska; sister Delores Sorensen of Lincoln, Nebraska; and 19 grandchildren and 3 great grandchildren. Funeral services for Donaven were held on Thursday, April 18, 2013 at 2:00 p.m. at the Grace Lutheran Church in Geneva, Nebraska. Pastor Stephen Kruschel officiated the services. Cherie Domeier accompanied Ray Nichols in the singing of "Amazing Grace" and she accompanied the congregation in the singing of "A Mighty Fortress Is Our God." Pallbearers for the service included Dillon Bornschlegl, David Schwartz, Reece Schwartz, Gunnar Bornschlegl, Gerhardt Bornschlegl, and Boaz Bornschlegl. Military Graveside services for Donaven were held in the Ohiowa Public Cemetery with rites being performed by the Geneva VFW Samuel J. Marsh Post 7102. Memorials are directed to the family for later designation. Farmer & Son Funeral Home arranged the services.

The family of Donaven G. "Barney" Bornschlegl created this Life Tributes page to make it easy to share your memories.