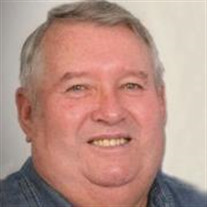 Funeral services for Donavon will be held on Tuesday, February 24, 2015, at Farmer & Son Funeral Home in Geneva, NE at 11:00 AM with Chaplain Aaron Phillips officiating. Visitation will be held on Monday, February 23, 2015, starting at 2:00 PM and going until 8:00 PM at Farmer & Son Funeral Home in Geneva. Graveside services will be held at the Bruning Public Cemetery. Memorials can be directed to the family for a later designation. Donavon Dean Meyer, age 74, died at home on February 20, 2015. Born to Earl & Delia (Bowman) Meyer in rural Bruning, Nebraska, August 24, 1940. Don grew up around Bruning, known by many as “Skinny”. He was baptized and confirmed in the Trinity Lutheran Church in Bruning, but in later years became a member of the United Methodist Church also in Bruning. In 1946, he attended Harmony country school between Bruning and Ohiowa, and graduated from Bruning Public School with the class of 1958. He joined the Army National Guard in 1964 where he was a member of the 134th Infantry at Fairbury, Nebraska until his honorable discharge in 1970. On July 23rd, 1965, Don married Rita Anderson-Salfrank. Through this union, Don acquired his oldest daughter, Lisa Salfrank, and over the next few years Don & Rita had 2 more children, Terry & LeeAnn. Don began farming and raising cattle with his father, Earl, after graduating high school. In early 1980s, Don started “Don’s Hay-grinding, Bailing and Swathing” business, with his dad working alongside him. In 1985, after his son, Terry, graduated high school, Terry joined Don & Earl full time in the farming operation. On October 31, 1987, the family was distraught with the death of their son Terry, thus soon after, Don sold the Hay-grinding business to his son-in-law, Jon. Don continued farming with Earl, until his death in 1993. At age 60, Don and Rita retired, sold their home & farming equipment and became “snowbirds”. They bought their first 5th wheel camper and a home in Zapata, Texas for the winter months. Don took up various wood working projects after retirement, starting small with ballpoint pens and pencils, shelves, decorative items for the home and even a fence for their yard in Zapata. During the summer months they traveled to camp grounds around the Midwestern states with Good Sam Excel, Blue River Sam and Road Runner Sam Clubs, enjoying time spent with old friends and making new friends. Over the years, Don’s interests included, spending time with family and many friends and neighbors, wood working, bowling, playing cards, hanging out at Remmer’s Garage, camping, fishing, and especially following the grandchildren’s sporting events. In recent months with his failing health, they purchased a home in Geneva. With the help of his children and grandchildren they got moved in just prior to Don being put on hospice care. Even through his final months, Don still enjoyed watching Western movies, listening to classic country music, visiting and teasing his grandchildren, great-grandchildren and the Asera Care hospice nurses and staff that would visit with him daily. Don is survived by his wife, Rita; daughters & their spouses, Lisa & Jon Chapman of Hebron; LeeAnn & Doyle Eichelberger of Geneva; Grandchildren, Amanda & Brandon Norquest of Aurora; Logan Chapman of Chicago, IL; Lacy & Kyle Kimbrough of Geneva; Lindsay Eichelberger and Lance Eichelberger of Geneva; Great Grandchildren, Paxton Norquest, Lane & Larsyn Kimbrough. Uncle, Marvin Meyer of Seward; Aunt, Pat Bowman of Bruning; & several cousins, & life-long friends Don was preceded in death by his son, Terry Dean, his parents Earl & Delia, infant sister, Donna Jean, & his in-laws Clyde & Dolly Marie Anderson.

The family of Donavon Dean Meyer created this Life Tributes page to make it easy to share your memories.

Funeral services for Donavon will be held on Tuesday, February...

Send flowers to the Meyer family.