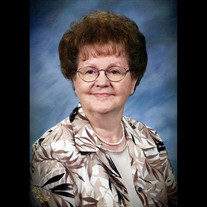 A Funeral Service for Donna will be conducted on Thursday, May 4, 2017 at 1:00 p.m. at the United Methodist Church in Exeter, Nebraska with Kim Dunker officiating. Visitation will be held at Farmer Funeral Home in Exeter, Nebraska on Wednesday, May 3, 2017 from 1:00 p.m. until 8:00 p.m. with the family greeting public from 5:00 p.m. until 7:00 p.m. Graveside Services will be held at the Exeter Cemetery. Memorials may be directed to the family for later designation. Donna Rae Taylor was born on January 29, 1933 to Ray and Leona Taylor on the family farm near Exeter, Nebraska. There, she joined her older siblings, Darleene and Daryl. Donna went to country school through the eighth grade and then to high school at Exeter High School, graduating in 1950. Donna married Rex E. Baller on March 13, 1950, and together they lived on the Baller farm near Waco, Nebraska. At the farm, Donna and Rex had three children, Arnie, Mary, and Diane. The family later moved to Seward, Nebraska, and then to Oakland, Iowa, where another child, Barb, was born. Donna resided with her family in Oakland, Iowa, for 50 years. She then lived at Oakland Heights Assisted Living for the past five years of her life. Donna enjoyed music throughout her life and brought much joy to her family and friends by playing the piano and organ for them. Some of her other hobbies included being a part of Book Club, church coffees, and Organ Club, as well as traveling to new places with family and friends. Donna was also a member of the Methodist Church of Exeter, NE, Methodist Church of Oakland, IA, and Silver Creek Methodist of Hancock, IA during her lifetime. Donna had several grandchildren, Paul (Candace) Krueger of Carson, IA, Angie (Nick) Shanno of Oakland, IA, Rachael (Corey) Gray of Seward, NE, Christy and (John) Wolfe, Dakota and Payton Baller of Council Buffs, IA, and Kayla Cull of Omaha, NE. She was also blessed with great-grand children Ella, Audrey, and Annabelle Gray of Seward, NE, and Rex and Max Shanno of Oakland, IA, and Dean Wolfe of Council Bluffs, IA. She loved all of them and enjoyed watching them grow up over the years. Donna is survived by her three daughters Mary Krueger and son-in-law Mike Krueger of rural Hancock, IA, daughter Diane Brown of rural Oakland, IA, daughter Barb Cull of Omaha, NE and a daughter-in-law Laura Baller of Council Bluffs, IA. She is also survived by her sister Darleene Becker of Exeter, brother Daryl Taylor of Cordova, NE, sister-in-law Vera Rauscher of rural Exeter, NE, several nieces, nephews, cousins, and friends. Donna was preceded in death by her parents Leona and Ray Taylor, husband Rex Baller, son Arnie Baller, and son-in-law Dan Cull.

A Funeral Service for Donna will be conducted on Thursday, May 4, 2017 at 1:00 p.m. at the United Methodist Church in Exeter, Nebraska with Kim Dunker officiating. Visitation will be held at Farmer Funeral Home in Exeter, Nebraska on Wednesday,... View Obituary & Service Information

The family of Donna Rae Baller created this Life Tributes page to make it easy to share your memories.

A Funeral Service for Donna will be conducted on Thursday, May...

Send flowers to the Baller family.