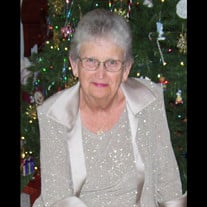 Donna Rose (Andersen) Williams was born on April 10, 1934 to Einar & Gracia (Overturf) Andersen on their farm in rural Edgar, NE. Donna passed away August 5, 2017 at Heritage Crossing Nursing Home in Geneva, NE at the age of 83 years, 3 months, and 26 days. She was the eldest of two children. Donna married Don Larry Williams on December 28, 1952 in Ong, NE. To this union one daughter, Cindy, and three sons, Barton, Randy, and Brad were born. Don and Donna lived most of their married life in rural Davenport, NE. Donna was a school teacher in a country school, and worked at the Geneva Bakery for several years, but was happy to be primarly a farm wife and mother most of her married life. She was a long time member of the Ong Methodist Church and was very proud when she was presented her 50 year member pin. Donna was an excellent cook and baker, and made many wedding and anniversary cakes both for friends and as a part time home business for many years. Donna was magic with any kind of cloth, thread, or yarn. She did everything from any type of handwork to making clothes. She loved to give embroidery work to family and friends and was truly an artist with her work. Don and Donna loved to travel, and spent winters in Rockport, TX for over 30 years. They visited a lot of the country in their various travel trailers and campers. Donna loved to have company, and always had the coffee pot on and some treat just out of the oven. One of her greatest joys was to have friends or family stop by. Donna was always doing things to help other people. She always had a loaf of homemade bread and a pot of homemade chicken soup ready to anyone who was sick. Donna was preceded in death by her parents Einar and Gracia Andersen; her brother Carl Andersen; and son Barton. She will be greatly missed by her survivors including her Husband Don Williams; Children Cindy Williams, Randy (Penny) Williams, and Brad (Barb) Williams; Grandchildren Perry (Deanna) Gunn, Nathan (Katie) Michels, Jesse (Teresa) Williams, Laura (John) Reed, Seth (Micaela) Williams, and Cole Williams; 6 Great Grandchildren, and many friends and family. A Memorial Service for Donna was held on Wednesday, August 9, 2017 at 11:00 a.m. at the United Methodist Church in Geneva. Pastor Michelle Gowin officiated the service. Sondra Myers accompanied the congregation in the singing of “Amazing Grace” and “How Great Thou Art.” Pallbearers for the service included Perry Gunn, Nate Michels, Seth Williams, John Reed, Jesse Williams, and Cole Williams. Private Family Interment was held in Ong Cemetery prior to the Memorial Service. Farmer & Son Funeral Home conducted the services and online condolences may be left at www.farmerandsonfuneralhome.com. Memorials are suggested to the family for future designation.

The family of Donna R. Williams created this Life Tributes page to make it easy to share your memories.

Send flowers to the Williams family.