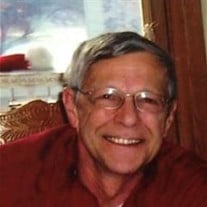 A Memorial Service for Dorian will be held on Friday, October 6, 2017 at 10:30 a.m. at Farmer & Son Funeral Home - Kotas Chapel in Milligan, Nebraska with Pastor Pat Norris officiating. There will be no visitation as Dorian's wishes were to be cremated. Military Graveside Services will be held following the Memorial Service at the Bohemian National Cemetery in Milligan, Nebraska with the Milligan American Legion - HSSK Post 240 conducting the military honors. Memorials are to be directed to the family for a later designation. Dorian James Bunker was born to James A. Bunker and Dorothy R. (Koca) Bunker on September 16,1949, in Lincoln, Nebraska and passed away on October 1, 2017, at Homestead Nursing Home, Lincoln, Nebraska, at the age of 68 years, 15 days. He was the second of three children. During high school, he was very involved in sports and music and excelled in both. He was active in 4-H and was selected as Adams County 4-H King in 1969. Dorian attended Central Nebraska Technical College in Hastings from 1967 through 1969, graduating with an Associates Degree in food service. He was drafted into the Army on September 9, 1969 and was sent to Germany where he served as a General's Enlisted Aide for two years. He was discharged on June 9, 1971. On February 5, 1972 he was married to Victoria S. Johnson in Hastings, Nebraska. From that union two children were born, Adam J. Bunker and Dori A. Bunker. Dorian was employed by PFM (Professional Food Service Management) that contracted with colleges and universities to manage their food service programs. Beginning in 1972, they lived and worked in Sioux Falls, S.D., fed Boy Scouts in Michigan, then transferred to Pepperdine University in Malibu, California, and then to California Institute of the Arts. In 1975 they moved to Northglenn, Colorado where he fed college students at the Colorado School of Mines. On January 1, 1977, the family moved to Milligan, Nebraska, and he helped his father and mother run Bunker's Inn & Lounge purchasing the business in 1985. While in Milligan, he was on a bowling league and he also spent many hours fishing and even participated in several out of state fishing tournaments. Dorian divorced in 1993 and in 1996 married Constance (Hubl) Jarosik. Dorian and Connie made their home in Aurora, Nebraska. He continued in the food service industry until his retirement. He enjoyed spending time with his step-grandson, Cameron, whom he taught to bowl, and with Cameron's dog "Lucky". He was a member of the American Legion H.S.S.K. Post #240, Milligan. He is survived by his wife Connie Bunker of Aurora; children Adam J. Bunker and wife, Katie, of Lincoln, Dori Ann Bunker of Omaha and her significant other Steve Stimple of Grand Island; sister Letitia Naprstek, and her husband Dale of Ord; step-children Ed Jarosik and spouse, Tanya Henrichs and spouse, Tiffany Jarosik, Jennifer Jarosik and Darren Jarosik and spouse; step-grandchildren, Cameron, Rachel, Micah, Dakota, Logan, Mya and Raelyn; one niece and one nephew; first cousins and all of his "Bunker" relatives from Missouri. He was preceded in death by his parents, baby brother Delwyn, and one stepson, Luke Jarosik.

A Memorial Service for Dorian will be held on Friday, October 6, 2017 at 10:30 a.m. at Farmer & Son Funeral Home - Kotas Chapel in Milligan, Nebraska with Pastor Pat Norris officiating. There will be no visitation as Dorian's wishes were to... View Obituary & Service Information

The family of Dorian J. Bunker created this Life Tributes page to make it easy to share your memories.

A Memorial Service for Dorian will be held on Friday, October...

Send flowers to the Bunker family.