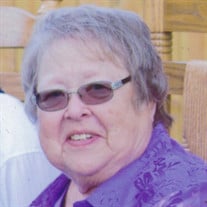 A Memorial Service for Doris was held on Saturday, December 7, 2019, at the Evangelical Free Church in Geneva, Nebraska at 2:00 p.m., with Pastor Galen Rasmussen presiding. There were 3-recorded songs played during the Memorial Service, “I Want To Stroll Over Heaven With You” by Alan Jackson, “The Old Rugged Cross” by Alan Jackson and “Amazing Grace” by Alan Jackson. Honorary Urn Bearers included Brent Haumont, Christian Haumont, Wyatt Hansen, Garrett Hansen, Ryan Haumont, Kody Haumont, Nathan Schropfer, Jared Shipman, Jacob Shipman and Joey Koci. Graveside Services will be held in the Geneva Public Cemetery at a later date. Memorials were directed to the family to be designated at a later date. Farmer & Son Funeral Home was in charge of funeral arrangements. Doris Jean Haumont was born to Quinten Lyle Witherwax and Helen Louise Nolte on March 19, 1942 at Ord, Nebraska and passed away December 2, 2019 in her home in Geneva, Nebraska at the age of 77 of a massive heart attack. Doris grew up on a farm north of Ord, attending Ord High School where she graduated in 1960. She then moved to Seattle, Washington where she worked for Boeing. While in Seattle she was married and out of that marriage came Michael. Doris lived in Seattle until she moved back in 1966 to Ord. She worked as a bookkeeper at Roman’s Motor Freight. Doris met Glen Haumont while working at Roman’s. Doris was married to Glen Edmond Haumont of Broken Bow, Nebraska on October 20, 1967. They resided on the Haumont farmstead, and later moved into town. In 1975, Doris and Glen adopted Robert Joseph and Amanda Faye. In 1982 the family moved to Kearney where Doris worked for H&R Block as a bookkeeper for 20 years. Doris and Glen sold their acreage in 2008 and moved to Geneva. During the early years she helped Mike at his computer store, where Doris knew no stranger. You would often see Doris at the grandchildren’s activities or out in the yard with her flowers, birds and girls. Doris tried her hand at lots of hobbies but her favorite was crossword puzzles. Doris was preceded in death by her parents, Quinten and Helen, and brother, Virgil Witherwax. She was survived by her husband, Glen Haumont of Geneva, Mike and Anita Haumont of Geneva, Rob and Selana Haumont of Hastings, and Bill and Amanda (Haumont) Schropfer of Fairmont. Grandchildren, Brent (Stephanie) Haumont of Clayton N. Carolina , Justine Truckenrod of Omaha and Courtney Haumont of Omaha , Christian (Brandi) Haumont of Geneva, Destiny Shipman of Omaha, Jared (Skye) Shipman of Grand Island, Jacob (Morgan) Shipman of Grand Island, Wyatt and Garrett Hansen of Fairmont, Nathan Schropfer of Fort Stewart, Kody and Ryan Haumont of Kearney, and Joey Koci of Hastings. She is also survived by six and ¾ great grandchildren. Doris was a beloved wife, mom, grandmother, sister, aunt, cousin, and friend. Her greatest joy was her children, grandchildren and great grands.

A Memorial Service for Doris was held on Saturday, December 7, 2019, at the Evangelical Free Church in Geneva, Nebraska at 2:00 p.m., with Pastor Galen Rasmussen presiding. There were 3-recorded songs played during the Memorial Service, &#8220;I... View Obituary & Service Information

The family of Doris J. Haumont created this Life Tributes page to make it easy to share your memories.

A Memorial Service for Doris was held on Saturday, December 7,...

Send flowers to the Haumont family.