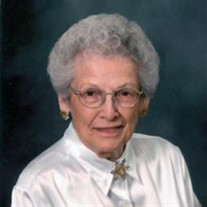 A Memorial Service to celebrate Doris’ life will be held on Monday, April 27, 2015 at 11:00 AM at First Christian Church in York, NE with Rev. Titus Cline officiating. Visitation will be held on Sunday, April 26, 2015 from 1:00 – 8:00 PM with the family meeting guests from 6:00 – 7:00 PM at Farmer Funeral Home in Exeter, NE. There will be a Private Family Graveside service prior to the celebration of life service on Monday (4/27/15) at Zastrow Cemetery in Cordova, NE. In Lieu of Flowers, memorials are to be directed to Zastrow Cemetery Association. Doris Margaret (Warner) (Ware) Henrickson, 96 years 3 months and 3 days, of York, NE passed away peacefully on Tuesday, April 21, 2015 at York General Hearthstone in York, NE. Doris was born to Arthur W. Warner and Mina (Railsback) Warner on January 18, 1919 on a ranch near Roy, Montana. In 1923 her father died in an accident and her Mother moved the family back to Blakesburg, Iowa. Doris attended school in Blakesburg and graduated from high school in 1937. Doris moved to Cheyenne, Wyoming to be with her sister, Clare, and there met Wayne Ware. In 1939 they were married and moved to Palmer, AK. Later they moved to Matanuska, Alaska. In 1941 they had a son, Jerry Wayne Ware, and in 1942 moved to Anchorage, Alaska. In 1944 she and Jerry left Alaska on the Alaska Steamship Company out of Seward and went back to Cheyenne, Wyoming, where she attended beauty school. In 1948 Doris married Cletus “Skeets” Henrickson. They lived in Cheyenne until 1966 when they moved to Anchorage to be closer to their grandchildren. During her time in Anchorage, she worked at Alaska Methodist University as a switchboard operator. In 1977 she retired and they drove to Cordova, NE where they resided for a number of years. In 1989 Skeets passed away and Doris moved to Mission, Texas where she resided until 1996 when she moved to Sundance, Wyoming. In 1998 she moved to York, Nebraska where she resided till her death. Doris enjoyed square dancing and gardening. Her main enjoyment was spending time with her grandchildren. Doris has left a Son, Jerry (Judy) Ware, her three grandchildren, Diane (Darryl) Heath, John Ware (Beverly Valdez), and Donna Ware (Jerry Cannon) and three great grandchildren, Wyatt Heath, Makayla Heath, and Parker Cannon, numerous nieces and nephews. She was preceded in death by her husband, Skeets Henrickson; her parents, a granddaughter, Geriann Ware, and three brothers and three sisters.

The family of Doris Margaret Henrickson created this Life Tributes page to make it easy to share your memories.

A Memorial Service to celebrate Doris’ life will be held on Monday,...

Send flowers to the Henrickson family.