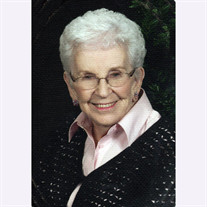 Funeral services for Chaddie will be held on Monday, January 5, 2014 at 10:30 a.m. at the United Methodist Church in Geneva. Graveside services will follow the funeral in the Geneva Public Cemetery. Visitation will be on Sunday from 1:00 p.m. to 8:00 p.m. at the Farmer & Son Funeral Home in Geneva. Memorials are directed to the family for later designation. Dorothy Mae Chadderdon Brooke ‘’Chaddie” was born to Ellis Howard Chadderdon and Clara Mae Stone Chadderdon on April 18,1916 in Garcia WA in a depot and passed awav January 1, 2015 at Heritage Crossing in Geneva NE at the age of 98 years 8 months and 17 days. She was one of 5 children in the family. Her family moved several times and settled in Rayville, LA. She graduated from Rayville High School in 1933. She then rode a train to Lincoln, NE and stayed with her grandmother while she attended Nebraska Wesleyan. The second year she moved in to the sorority house and there were 5 Dorothy’s in her sorority, thus they nicked-named her Chaddie which stuck for a life time. In 1936 she got a teaching job in Geneva and she taught 4th grade for four years. A farmer named John Brooke became interested in her. At that time, you could not teach and be married. So, after John and Chaddie were married in 1940, she settled into the role of a farmer’s wife, helping feed cattle and driving the truck during harvest. They were blessed with two children: Pat and Dick, five grandchildren and 8 great grandchildren. Family was extremely important to Chaddie. She loved when her grandchildren and great grandchildren would come for a visit. Chaddie was a teacher at heart. After her kids were in school, she substitute taught for the next 20 years in all areas except superintendent and maintenance. After she and John retired and started spending their winter months in Texas, she continued with her teaching. She taught English through a Catholic organization to Hispanic women. She was an active member of PEO for 60 years and a member of the United Methodist Church for 74 years. Chaddie was an avid volunteer who loved helping people. She gave her time to Heritage, YRTC, the Heart Hospital in McAllen, Texas, and Fillmore County Hospital Lifeline. She was preceded in death by her parents; her husband; 1 brother, 2 sisters, 2 infant sons and 1 infant granddaughter. Chaddie is survived by her daughter, Pat and husband Dick Nelson of Geneva; son Richard and Sharon Brooke of Geneva; sister Betty King of Ferriday, LA, grandchildren: Max and Sherry Nelson of Phoenix, AZ, Becky and Jeff Lindquist of Lincoln, Kim and Hector Ortiz of Phoenix. AZ, Chris Brooke of Winston Salem. NC, Heather and Sean Newby of Winston Salem, NC; Great grandchildren: Dane and Jocelyn Nelson, Brooke and Luke Lindquist, Charlie Ortiz, Tierra, Jada and Jasmine Todd; nieces, nephews and other relatives and friends.

Funeral services for Chaddie will be held on Monday, January 5, 2014 at 10:30 a.m. at the United Methodist Church in Geneva. Graveside services will follow the funeral in the Geneva Public Cemetery. Visitation will be on Sunday from 1:00... View Obituary & Service Information

The family of Dorothy M. "Chaddie" Brooke created this Life Tributes page to make it easy to share your memories.

Funeral services for Chaddie will be held on Monday, January...

Send flowers to the Brooke family.