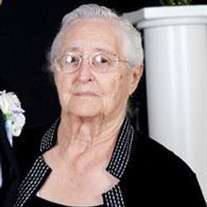 Funeral service for Dorothy will be 10:00 AM, Monday, August 4, 2014 at the Salem Mennonite Church Rural Shickley, NE. Interment will be in the Salem Cemetery, Shickley, NE Visitation will begin Sunday, August 3, 2014, 1:00 PM until 8:00 PM at Farmer and Son Funeral Home in Geneva with family greeting friends from 5:00 to 7:00. Memorials to the Family for later designation. On February 1, 1917, Dorothy was born in rural Shickley, NE, in the midst of a snowstorm and temperatures reaching 24 below zero. The village doctor was snowed in and was forced to walk to the home of Abraham and Emma Troyer to assist in the birth of their first child. Dorothy’s early childhood time was filled with a lot of activity as she was the oldest of 12 brothers and sisters. She spent much time taking care of her younger siblings and helping with household tasks. Dorothy passed on to be with the Lord at Fillmore County Hospital at the age of 97. Dorothy married Lee Schlegel on February 3, 1949. They had two sons, David and Daniel. In addition to supporting Lee’s professions of farmer and pastor of Salem Mennonite Church, Dorothy sold eggs to her neighbors, kept a garden, and was always willing to help out her neighbors and family members. Dorothy was very active in the church by teaching Sunday School, Vacation Bible School, and regularly participating in women’s sewing circle. She worked as correspondent for the Nebraska Signal, the Mennonite Weekly Review, and the Missionary Challenge. Dorothy and her sister, Loretta, were master quilters who quilted over 260 quilts for other people. She always helped her sisters with all their quilting problems. Family was of utmost importance in Dorothy’s life. She had four grandchildren, who she enjoyed spending time with and spoiling in any way she could. They enjoyed stopping by her house for an after-school snack or an overnight stay. She also enjoyed playing games with them such as Rook, Dominoes and Chinese Checkers. When they went off to college, she became “famous” for her care-packages. Holiday gatherings were always a joyous time for Dorothy as she spent countless hours preparing cookies, candies and bountiful meals for everyone to enjoy. Dorothy’s love for family didn’t stop with her immediate family. She spent countless hours serving as an adopted grandmother to many girls at the Youth Rehabilitation and Treatment Center. Dorothy spent her life selflessly serving those whom she held dear. Dorothy was preceded in death by her husband, Lee; son, David; brothers, Glenn, Les, and Ivan; and sister, Loretta. She is survived by her son, Daniel, of Shickley; her daughter-in-law, Gladys, of Shickley; her four grandchildren, Christopher, wife Cassie, and son Joshua of Rapid City, SD, Julie of Lincoln, Gregory and wife Bethany of Omaha, and Bradley and wife Amanda of Omaha. She is also survived by three brothers and four sisters: Jim and Norma Troyer of West Point; Mary and Bill Armfield of Hesston, KS; Betty Springer, Eunice Stutzman, Vi and Merrill Stutzman, all of Milford; Harold and Clarice Troyer of Jessup, IA, and Leonard Troyer of Talego, OK.

Funeral service for Dorothy will be 10:00 AM, Monday, August 4, 2014 at the Salem Mennonite Church Rural Shickley, NE. Interment will be in the Salem Cemetery, Shickley, NE Visitation will begin Sunday, August 3, 2014, 1:00 PM until... View Obituary & Service Information

The family of Dorothy M. Schlegel created this Life Tributes page to make it easy to share your memories.

Send flowers to the Schlegel family.