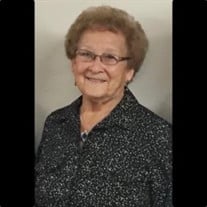 Dorothy Ella Skrivanek was born to Joseph R. and Ella (Eret) Vnoucek on September 21, 1922 at Friend, Nebraska and passed away on May 31, 2022 at Heritage Crossings Nursing Home in Geneva, Nebraska at the age of 99 years, 8 months and 10 days. She was the second of six children in the family. Dorothy was born on the family farm 8 miles south of Friend, Nebraska. She attended country school District 100 and then, along with her sister Arlene, lived with their Grandmother Eret in Crete, Nebraska to attend high school where she graduated with the class of 1940. After graduation, Dorothy attended business college in Kansas City until World War II broke out. She then began working at both the Fairmont and Bruning Airbases in support of the war effort. On October 23, 1945, Dorothy was married to Leslie Skrivanek at her family home near Friend, Nebraska. They made their home on the Skrivanek farm near Milligan, Nebraska. Together, they had three children: Loren Gene, Alan Leslie, and Debra Ann. Dorothy enjoyed working alongside Les on the farm and raising their children. She was an expert seamstress and enjoyed cooking many Czech delights. After the children were grown, she worked at the Youth Development Center in Geneva, Nebraska. In retirement, Dorothy enjoyed making memories with her family, traveling, working outdoors and baking her delicious kolaches. Her fun-loving nature and kindness will be remembered by many. Dorothy was very active in her community. She was a Gold Star Sister member of the American Legion Auxiliary HSSK Post #240, charter member of the Crete DAV Auxiliary and member of Saline Center WFLA Lodge #389. She was also a member of the Milligan United Methodist Church and was a sponsor for the Methodist Youth Choir and Youth Fellowship. Dorothy was preceded in death by her parents, Joseph & Ella Vnoucek; husband, Leslie Skrivanek; son, Loren Skrivanek; brothers and sisters-in-law, Loren Vnoucek, Arnold Vnoucek and wife Evelyn, Anna Vnoucek; sisters and brothers-in-law, Arlene Kassik and husband Leonard, Betty Soukup and husband Raymond; niece, Nancy Soukup; and great nephew, Dean Kassik. She is survived by her son, Alan Skrivanek of Milligan, Nebraska; daughter, Debra Skrivanek Hall of Lincoln, Nebraska; brother, Joe Vnoucek of Fairmont, Nebraska; grandchildren, Jarod (Alex) Skrivanek of Denver, Colorado, Jeff (Carmen) Skrivanek of Elkhorn, Nebraska, Tyler Skrivanek, of Denver, Colorado, Shannon Skrivanek of Clarkston, Washington, Jessica Hall of Jamestown, North Dakota; great grandchildren Haley Skrivanek, Destiny Skrivanek, Cody Sessions, Brenden Sessions, and Hunter Owens; and many nieces, nephews, and cousins. A Funeral Service for Dorothy was held on Tuesday, June 7, 2022 at 10:30 a.m. at the United Methodist Church in Milligan, Nebraska. Pastor Murry Johnston presided over the Funeral Service. Karen Kohler provided the prelude music and also accompanied the congregation in the singing of “In The Garden.” The recorded selections “Happy Memories,” “The Prayer,” and “Time To Say Goodbye” were also played during the Funeral Service. Pallbearers included Jarod Skrivanek, Jeffrey Skrivanek, Tyler Skrivanek, Michael Kassik, Dean Kassik, and Robert Vnoucek. Honorary Pallbeares included Jessica Hall and Shannon Skrivanek. A Graveside Service was held in the Bohemian National Cemetery following the Funeral Service. Farmer & Son Funeral Home was in care of the arrangements and online condolences can be left at www.farmerandsonfuneralhome.com Memorials are suggested to the Milligan American Legion Auxiliary HSSK Post 240 or the Milligan United Methodist Church.

Dorothy Ella Skrivanek was born to Joseph R. and Ella (Eret) Vnoucek on September 21, 1922 at Friend, Nebraska and passed away on May 31, 2022 at Heritage Crossings Nursing Home in Geneva, Nebraska at the age of 99 years, 8 months and 10 days.... View Obituary & Service Information

The family of Dorothy E. Skrivanek created this Life Tributes page to make it easy to share your memories.

Send flowers to the Skrivanek family.