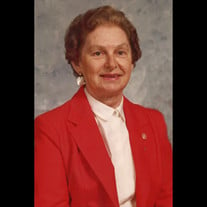 Dorothy L. Yaeger passed away peacefully on Monday, April 8, 2019, at Heritage Crossings nursing home in Geneva, Nebraska after a long struggle with Alzheimers. She was 100 years old. Dorothy LaVeta Rolfes was born to Frank H. and Dora E. (Keller) Rolfes on May 15, 1918. She was baptized and confirmed at St. Helena’s Catholic Church in Grafton, Nebraska. She attended the Grafton Public School, graduating in the Class of 1935, and then attended the University of Nebraska for two years. She worked for the Prudential Insurance Company in Omaha for four years, then moved to Washington, DC and worked in the Pentagon for the Department of the Navy. She took a leave of absence in August 1945 and on the way back to Nebraska by train, peace was declared. She then moved to California in 1946 and worked for Gardner-Denver Company and the Pneumatic Machinery Company. On April 9, 1952, she married Harold C. Waltrip and to this union two children were born, Robert Paul Waltrip and Janet Marie Waltrip. Harold died suddenly of a heart attack in August, 1960, leaving behind the two children, two years old and three months of age. Dorothy and the children spent three summers with her parents on the farm in Grafton. On January 6, 1964 she married Richard H. Yaeger at St. Helena’s Catholic Church in Grafton, and after building a new home on Richard’s farm, they moved into it in January 1965. Janet Marie was killed in an auto accident near Grafton on July 9, 1966. Robert died of a heart attack on January 24, 2015, while vacationing in Arizona. Dorothy was a member of St. Helena’s church Circle, Legion Auxiliary #61 of Sutton, Fairview Extension Club, Fairview Manor Auxiliary of Fairmont, Geneva Hospital Auxiliary, and several bridge clubs. Dorothy is survived by her husband, Richard H. Yaeger, nieces, nephews, and cousins. She was preceded in death by her parents, Frank and Dora Rolfes of Grafton; children Robert and Janet; brothers Paul W. (Mary) Rolfes of Laguna Niguel, California; George A. (Madeline) Rolfes of Colorado Springs, Colorado; and Francis J. Rolfes of Bella Vista, Arkansas. A Funeral Mass for Dorothy was held on Friday, April 12, 2019 at 10:00 a.m. at St. Helena Catholic Church in Grafton. Father Michael Zimmer and Father Harlan Waskowiak officiated the Mass. Deb Hoarty accompanied the congregation in the singing of “Be Not Afraid,” “I Am The Break Of Life,” “On Eagle’s Wings,” and “Amazing Grace.” A Rosary was prayed by Father Michael Zimmer on Thursday, April 11, 2019 at 7:00 p.m. at the Heritage Crossings Chapel. Pallbearers for the service included Rod Kudlacek, Gary Kudlacek, Dick Hoarty, Robert Fessler, Jack Galusha, and Jeff Timmermans. Interment was held in the Holy Cross Cemetery, rural Grafton, following the Funeral Mass. Farmer & Son Funeral Home was in care of the arrangements and online condolences can be left at www.farmerandsonfuneralhome.com Memorials are suggested to St. Helena Catholic Church, 170 N Jackson Ave, Grafton, NE 68365 or the Alzheimer’s Association, 225 N. Michigan Ave., Fl. 17, Chicago, IL 60601

The family of Dorothy L. Yaeger created this Life Tributes page to make it easy to share your memories.