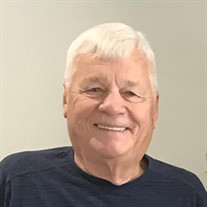 A Memorial Service for Doug will be held on Tuesday, January 5, 2021 at 10:30 a.m. at Farmer & Son Funeral Home in Geneva, Nebraska with Pastor Jeff Jensen presiding. No Visitation - Cremation. Military Graveside Services will be held at a later date at the Davenport Cemetery in Davenport, Nebraska. Memorials are to be directed to the family to be designated at a later date. A Livestream Video of the service will begin at 10:30 a.m. To view the Livestream Video you can go to Farmer & Son Funeral Home's Facebook Page or in your search engine type @friendlyfuneraldirectors and click the link to Farmer & Son or click this link https://www.facebook.com/friendlyfuneraldirectors/Funeral and it should direct you to our Facebook Page. All COVID-19 regulations will be followed. Douglas Ray Cox of Geneva, Nebraska passed away peacefully at home on December 26, 2020 at the young age of 74. Doug was the only child born to Howard Delmar Cox and Helen May (Lichty) Cox. Doug spent his early childhood in Bushnell, Nebraska until the family relocated to Los Alamos, New Mexico for his father’s work. In 1953, the family returned to Nebraska, settling in Davenport. Doug graduated from Davenport High School in 1964 and continued his studies at Doane College in Crete, Nebraska. He played on the football team until he was called to serve in the United States Navy on January 22, 1970. Doug was honorably discharged on September 12, 1973. Doug married Linda Marie Morrison in 1974 and to this union, Bethany Jo Cox was born. After moving back to Davenport Nebraska, Doug and Linda owned & operated the Halftime Café. After divorcing, Doug went on to pursue a variety of endeavors including cattle hauling and then to drive truck for Schulz Transportation where he acquired many memories and friends who he thought the world of. After retiring, he enjoyed doing farm work for “RV” during the spring and fall, as to not interfere with him enjoying his hobbies. Doug had many hobbies. Most notably, golf. He participated in league play on Tuesdays and also played with the “Old Goats” daily at 1 pm. Competitive by nature, he enjoyed trying to take the other guys’ quarters. Doug was also a Corvette enthusiast. He liked the camaraderie he shared with other Corvette owners at the various car shows he attended. Doug also enjoyed NASCAR races and NHRA races. He enjoyed the time spent with family and friends and the shenanigans that followed afterwards at the campground. Doug is preceded in death by his father, Howard Delmar Cox. He is also preceded in death by his mother, Helen May (Lichty) Cox Holroyd and stepfather, Ray Holroyd. Doug is survived by his daughter, Bethany Cox and fiancé, Thomas R. Drain, several cousins, relatives and a multitude of friends who will miss him dearly.

A Memorial Service for Doug will be held on Tuesday, January 5, 2021 at 10:30 a.m. at Farmer & Son Funeral Home in Geneva, Nebraska with Pastor Jeff Jensen presiding. No Visitation - Cremation. Military Graveside Services will be held at a... View Obituary & Service Information

The family of Douglas Ray Cox created this Life Tributes page to make it easy to share your memories.

A Memorial Service for Doug will be held on Tuesday, January...

Send flowers to the Cox family.