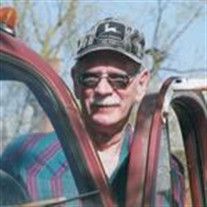 Funeral Services for Doug will be held on Tuesday, May 30, 2017 at 10:00 a.m. at Farmer & Son Funeral Home in Geneva, Nebraska with Kim Dunker officiating. Visitation will be held on Monday, May 29, 2017 from 1:00 p.m. until 8:00 p.m. at Farmer & Son Funeral Home in Geneva, Nebraska. Memorials are to be directed to the family for a later designation. Graveside Services will be conducted from the Geneva Public Cemetery. Douglas Gregory Otwell, 63, of Shickley, Nebraska passed away Tuesday, May 23,2017. He was born January 5,1954 in Washington, Kansas, the son of, Leslie W. Otwell and LaVerne Elizabeth (Norrie) Otwell Roe. Doug grew up in Palmer, Kansas and graduated from Linn High School in 1972. Doug followed the Otwell tradition of trucking and was proud of being an over-the-road truck driver of forty years until poor health lead to retirement in 2015. He was preceded in death by his younger brother, Jeffrey Wayne Otwell and his father, Leslie W. Otwell. Doug is survived by his wife, Joni Jean (Kembel) Otwell of Shickley, Nebraska, three children; Crystal Saldivar of Yuma City, California, Jacob Otwell of Rio Linda, California, Adam and wife Lillie Otwell of Carmichael, California; two grandchildren, Jadon and Danika Saldivar; his Mother, LaVerne "Betty" Roe; two brothers, James and wife Jana Otwell of Onaga, Kansas and Leslie Otwell Jr. and wife Kim of Corpus Christie, Texas.

The family of Douglas "Rancher" Gregory Otwell created this Life Tributes page to make it easy to share your memories.

Send flowers to the Otwell family.