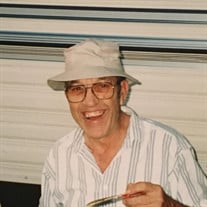 Memorial services for Duaine will be held on Saturday, July 16, 2016 at 10:00 AM at the Fairmont Community Church with Pastor Brad Barrows officiating. There will be no visitation - cremation. Inurnment of Ashes will follow the Memorial Service in the Fairmont Public Cemetery. Memorials are to be directed to Lions Club International - Leader Dogs For The Blind. Duaine Lee Roper was born to Curtis Roper and Alta (Avery) Curtis on September 3, 1933, at Fairmont, Nebraska, and passed away on July 13, 2016, at Fairview Manor in Fairmont, Nebraska, at the age of 82 years, 10 months, and 10 days. He was one of 3 children in the family. Duaine, also known as Buck, grew up on the Roper farm outside of Fairmont, and graduated from Fairmont High School. He attended Nebraska Wesleyan briefly before teaching at the country school near the farm in Fairmont, and then returned to Lincoln and Wesleyan, where he met Geraldine Gladys Swanson. Buck attended Devry Trade School in Chicago Illinois, studying technical drawing, and it was during this time that he and Geraldine (Gerry) were married, in 1957. The young couple moved to Denver, Colorado, where Buck worked for the Lockhead Martin Company. As a part of his employment with Lockhead, he had a brief assignment in California in order to work on the Titan Missile Project. Returning to Denver, Buck took a position with the Jewel T Company. They purchased a house on Jason Street, in Englewood, and adopted son Rob in 1961. Three years later they adopted daughter Julie, and returned to Fairmont in 1964, moving into his Grandmother Avery’s house. It was then that Buck found his true calling…that of a Beekeeper. He maintained the Roper Honey Company, he and Gerry sharing Lake Livingston, Texas and Fairmont, Nebraska as their residences. After retirement, they claimed Fairmont and Mission, Texas as their home bases. Buck was a member of the Fairmont Lions Club, the Fairmont Masonic Lodge, Grace Church and Fairmont Community Church. He volunteered as Cub Master for Fairmont’s Boy Scouts, and chaperoned many youth fellowship outings. He had a passion for genealogy, tracing the Roper and Avery lineages through papers and cemeteries. He loved evening rides in the country, checking his bees and ending with a charburger at Tony’s. He shared his love of water-skiing with his family and their friends, and delighted in teaching the next generation. He loved to hit the dance floor, play table tennis, and participate in the Melody Theatre, a performance group at Bentsen Grove Resort in Mission Texas. Mostly, he embraced his wanderlust spirit, and travelled. He first drove a camper, then pulled a fifth wheel, visiting nearly all 50 states. Buck loved meeting fellow campers and winter Texans, and he and Gerry grew a large network of travelling friends. He visited Mexico, Canada, Ireland, England, France, Germany, Switzerland, and Austria. He returned to his early drawing roots, this time picking up oils and watercolors. Buck’s greatest passions were his family and friends. He was sure to make coffee time at the Tower Café, hosted BooRay gatherings at the Honey House, and enjoyed drinking a beer and tossing stories and trivia. He loved round robin Ping-Pong with the Ropers, dyeing Easter eggs with his grandchildren, and taking his family into Progresso, Mexico for entertainment. Buck was preceded in death by his parents, Curtis and Alta Roper, his daughter-in-law, Ann Hannika Roper, and his great granddaughter, Kaley Kozisek. He is survived by his wife, Gerry; son, Rob; daughter, Julie; brothers, Marvin and Delvin; 6 grandchildren, and 10 great grandchildren.

Memorial services for Duaine will be held on Saturday, July 16, 2016 at 10:00 AM at the Fairmont Community Church with Pastor Brad Barrows officiating. There will be no visitation - cremation. Inurnment of Ashes will follow the Memorial Service... View Obituary & Service Information

The family of Duaine "Buck" L. Roper created this Life Tributes page to make it easy to share your memories.

Memorial services for Duaine will be held on Saturday, July 16,...