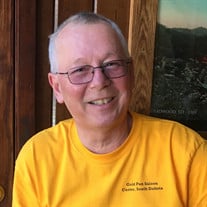 A Funeral Service for Dwayne was held on Saturday, October 5, 2019, at 10:30 a.m., at the Prince of Peace Lutheran Church in Geneva, Nebraska with Pastor Del Klover presiding. Organist, Shaunna O’Brien, accompanied the congregation as they sang 3 hymns “What A Friend We Have In Jesus”, “Precious Lord, Take My Hand” and “I’ll Fly Away”. Casket Bearers included Roger Kaiser, Keith Kaiser, Norm Kaiser, Brian Kaiser, and Evan Kaiser. Graveside Services were conducted at the Geneva Public Cemetery following the funeral service. Memorials were directed to the family to be designated at a later date. Farmer & Son Funeral Home was in charge of funeral arrangements. Dwayne Lee Kaiser was born on March 21, 1956, in Central City, Nebraska, to Roy and Geraldine (Gleason) Kaiser. He passed away on October 2, 2019, at his home at the age of 63. He was one of eight children in the family. He was baptized and confirmed at St. Paul’s Lutheran Church in Central City, Nebraska. Dwayne graduated from Central City High School in 1974. He then attended CCTC in Hastings where he met the love of his life, Kathy. Dwayne and Kathleen (Shafer) were married on September 10, 1977, and to this union, two children were born - Sara Lynell and Kristopher Ronald. They lived for a short time in Central City, Nebraska and later Holdrege, Nebraska before settling down in Geneva, Nebraska. Dwayne worked for the John Deere dealership for many years before starting his own CarQuest Auto Parts business in 2003. He truly enjoyed going to work every single day. He was a devoted husband, dad, “papa” and friend. His family, especially his children and grandchildren, were his greatest joy. He cherished friendships made and conversations had throughout his life. He loved to tell a good joke and reminisce with good friends. Dwayne lived life to the fullest and enjoyed many travels with Kathy during their time together. Their favorite destinations included Niagara Falls, the Smoky Mountains, Mexico and Florida. He loved spending time outside, especially sitting on the patio watching the birds. Dwayne was preceded in death by his father Roy Kaiser; and his granddaughter Nora Belle Kaiser. He is survived by his mother Geraldine Kaiser of Central City, Nebraska; wife of 42 years Kathy (Shafer) Kaiser of Geneva, Nebraska; his children Sara Johnson and husband Eric of Omaha, Nebraska, and Kris Kaiser and wife Wendy of Papillion, Nebraska; his five grandchildren Tyler Johnson, Mason Johnson, Leah Johnson, Emma Kaiser and Ben Kaiser; brothers Roger Kaiser and wife Elsa of Firth, Nebraska, Norm Kaiser of Central City, Nebraska, Keith Kaiser and wife Teresa of Bellevue, Nebraska, Brian Kaiser and wife Lynda of Owasso, Oklahoma, and Evan Kaiser and wife Jackie of Fairmont, Oklahoma; sisters Teresa Workman and husband Mark of Highland Ranch, Colorado, and Susan Shipley and husband Chuck of Peoria, Arizona; and many nieces and nephews, cousins and friends.

A Funeral Service for Dwayne was held on Saturday, October 5, 2019, at 10:30 a.m., at the Prince of Peace Lutheran Church in Geneva, Nebraska with Pastor Del Klover presiding. Organist, Shaunna O&#8217;Brien, accompanied the congregation as... View Obituary & Service Information

The family of Dwayne L. Kaiser created this Life Tributes page to make it easy to share your memories.

A Funeral Service for Dwayne was held on Saturday, October 5,...