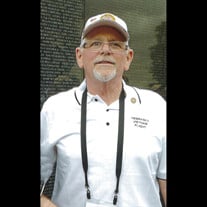 Dwight Allen West was born to Walter L. West and Evelyn (Garrett) West on August 26,1948 at Forks, Washington and passed away October 22,2017 at the Fillmore County Hospital in Geneva, Nebraska at the age of 69 years, 1 month, and 26 days, with his family by his side. He was one of two children in the family. Dwight's family moved to Fairmont, Nebraska when Dwight was 5 years old where he resided until his death. He graduated from Fairmont High School in 1966 and attended the University of Nebraska for one year. Dwight enlisted in the Army in 1968 and was honorably discharged in 1971. He was proud of his military service which included one year in Vietnam. When Dwight was home on leave in 1970 he met the love his life, Karen Ackerman, and they were married at Grafton, Nebraska on June 17, 1971. Two children were born to them: Kendra in 1973 and Ryan in 1976. Dwight was a proud dad and did his best to attend every school event and game his kids were involved in. He enjoyed sharing his love of hunting and fishing with Ryan and also attending Husker football games with both Kendra and Ryan. Dwight was always busy and enjoyed building things, including a rocking horse for his children and a wagon and clocks for his grandchildren. Later he became interested in making coin rings and spent many hours making them for friends and family. Home improvement was another hobby which Dwight and Karen enjoyed together. Together they remodeled every room in their home at least once and later helped Dave and Kendra build their home. Dwight served 25 years on the Fairmont Fire Department and Fairmont Rescue Unit. He was a member of the Fairmont Community Church and past member of the Fairmont Nursing Home board. Dwight was a generous husband and father who always wanted the best for his family. His own needs were never put before his family. After Dwight retired from his hardware and lumberyard business he began working part time at Geneva Home Center. He truly loved his work there. Dwight loved to joke and kid with people. He always had something funny to say and it didn't matter who you were, if he liked you he kidded you and that included everyone of every age….. Dwight faced his cancer with dignity and bravery. He never lost his sense of humor or good attitude. He often said 'It is what it is". He made many new friends during his cancer journey and continued to check on them and encourage them even during his last hospital stay. Preceding Dwight in death were his father Walter and mother Evelyn. He is survived by his wife Karen; daughter Kendra and husband Dave Larson of Denver, Iowa; son Ryan of Hastings, Nebraska; beloved grandchildren Emma, Alexander, Isaac and Ethan Larson and Skylar Kuil of Colorado; brother Doug of Lincoln, Nebraska; sister in law Barb Votipka and husband Robert of Exeter, Nebraska; nieces, nephews and great nieces and nephews. Dwight will be greatly missed by his family and friends who knew him and loved him. A Memorial Service for Dwight was held on Monday, October 30, 2017 at 10:30 a.m. at the Fairmont Community Church. Pastor Pat Norris officiated the service. Sondra Myers provided the prelude and postlude music and also accompanied the congregation in the singing of “Amazing Grace.” During the memorial video, the recorded songs “The Tide” and “The Way We Were” were played. Inurnment will occur at a later date in the Fairmont Public Cemetery. Services were under the direction of Farmer & Son Funeral Home. Online condolences may be left at www.farmerandsonfuneralhome.com. Memorials are suggested to the Fairmont Rescue Squad or the Fairmont Community Church.

Dwight Allen West was born to Walter L. West and Evelyn (Garrett) West on August 26,1948 at Forks, Washington and passed away October 22,2017 at the Fillmore County Hospital in Geneva, Nebraska at the age of 69 years, 1 month, and 26 days,... View Obituary & Service Information

The family of Dwight A. West created this Life Tributes page to make it easy to share your memories.