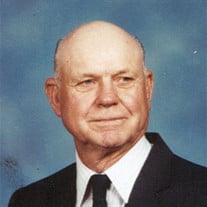 A Funeral Service for Earl will be held on Friday, January 12, 2018 at 10:30 a.m. at the United Methodist Church in Shickley, Nebraska with Pastor Martin Leeper officiating. Visitation will be held on Thursday, January 11, 2018 from 1:00 p.m. until 8:00 p.m. with family present from 5:00 p.m. - 7:00 p.m. at Farmer & Son Funeral Home in Geneva. Military Graveside Services will be held following the funeral service at the Ong Cemetery. Memorials are to be directed to the family for a later designation. Earl M. Anderson was born February 23, 1916 to Emill L. and Annie S. (Smith) Anderson in Harlingen, Texas and passed away January 8, 2018 at Heritage Crossings Nursing Home in Geneva, Nebraska at the age of 101 years. He was one of eight children. Earl went to grade school in Chile, Oklahoma and graduated from Ong High School in 1935. He began farming until he enlisted in the Army in 1941 – 1945. Earl was a survivor in the Battle of Guadalcanal in World War II. After the service he joined his brother E.L. in buying and selling used machinery and did custom corn shelling. In 1950, Earl and E.L. started the Anderson Brothers Irrigation business on the farm northwest of Shickley. In 1977 they moved the business to Shickley. He loved his work and coffee fellowship with friends and customers. In his free time he enjoyed bowling and pitching horseshoes up until the age of 95. Earl was a member of the Ong United Methodist Church. He was preceded in death by his parents; four sisters; Esther Ljungdahl, Florence Grimes, Mildred Carver, Mabel Mills, three brothers; Wesley, Tyndall, E.L., sisters-in law; Doris Anderson, Wilma Anderson, Esther Anderson, brothers-in-law; Edwin Ljungdahl, Bob Grimes, Clyde Carver, J.D. (Doe) Mills and nephews; Keith Grimes and Jerry McCollough. He is survived by nieces and nephews; Don Baxter, James Carver, Margaret McCollough, Carolyn Schlegel, Andy Anderson, Steve Anderson and many great nieces and nephews.

A Funeral Service for Earl will be held on Friday, January 12, 2018 at 10:30 a.m. at the United Methodist Church in Shickley, Nebraska with Pastor Martin Leeper officiating. Visitation will be held on Thursday, January 11, 2018 from 1:00 p.m.... View Obituary & Service Information

The family of Earl M. Anderson created this Life Tributes page to make it easy to share your memories.

A Funeral Service for Earl will be held on Friday, January 12,...