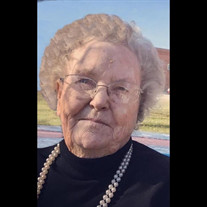 A Funeral Service for Edith will be held on Monday, December 6, 2021 at 2:00 p.m. at the Evangelical Free Church in Geneva, Nebraska. Pastor Jeff Jensen will preside over the Funeral Service. A Graveside Service will be held in the Fairmont Public Cemetery following the Funeral Service. A public Visitation will be held on Sunday, December 5, 2021 from 1:00 p.m to 8:00 p.m. with family present from 3:00 p.m. to 5:00 p.m. at Farmer & Son Funeral Home in Geneva. Memorials are suggested to the Fairmont Public Cemetery. Edith's Service will be live-streamed to Farmer & Son Funeral Home's Facebook page or Evangelical Free Church's Youtube page. Edith Chapman passed into eternity on December 2, 2021 at the age of 89 years 10 1/2 months at the Fillmore County Hospital in Geneva, Nebraska after being hospitalized for several days. She was born on January 16, 1932 in rural York County, Nebraska to Ivan and Laura (Kaiser) Tracy. She was the 5th of 5 children including Lloyd, Opal (Prohaska), Norman, and Wayne, and attended York High School. Edith met her husband, Monte Chapman, son of Everett and Ivy Chapman, from Burress, Nebraska, at the York Roller Skating rink where she worked as a skate girl helping fasten metal roller skates to street shoes. She married Monte at the age of 16 on July 22, 1948. They lived in Fillmore County their entire married lives and raised four daughters on the farm southeast of Fairmont. Monte died in June of 2007. Since then, Edith has lived in Fairmont the last 9 1/2 years at the Country Reflections Assisted Living facilities in Fairmont. She enjoyed watching the birds and squirrels outside her window and also the daily interaction of the staff and her hallway neighbors during the various activities there. She especially enjoyed playing Bingo, Dominoes, card games, and attending church, Bible studies, and special events. Edith was a self-appointed one-woman welcoming committee at Country Reflections, helping new residents get adjusted. Surviving Edith are her four daughters and their families. Included in this list are Linda and Daniel Bohling of Phoenix, Arizona, Wanda Marget of Fairmont, Nebraska, Pamela and Chad Baker of Firth, Nebraska, and Marcia and Steve Cantrell of Norfolk, Nebraska. Edith was blessed with 16 grandchildren and 40 great-grandchildren, the latest of these born less than a month ago! She was preceded in death by her parents and siblings; husband Monte; son-in-law Bill Marget; one grandson Andrew Bohling; and one great-grandson Isaiah McGahan. Edith cherished many memories of family gatherings in Southeastern Nebraska and the trips she and Monte took to see extended family. They also enjoyed driving the Metropolitan cars in many parades. Family was highly prioritized and valued. Her life will be celebrated by family and the many neighbors and friends she made in this life.

A Funeral Service for Edith will be held on Monday, December 6, 2021 at 2:00 p.m. at the Evangelical Free Church in Geneva, Nebraska. Pastor Jeff Jensen will preside over the Funeral Service. A Graveside Service will be held in the Fairmont... View Obituary & Service Information

The family of Edith M. Chapman created this Life Tributes page to make it easy to share your memories.

A Funeral Service for Edith will be held on Monday, December...