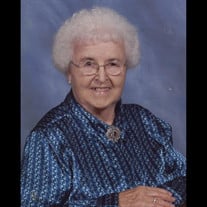 Edna Anna Capek was born on January 26, 1926 to Joseph and Emma (Filipi) Zumpfe at the family farm south of Friend, NE. She passed away on May 9, 2016 at the Heritage Crossing in Geneva, NE reaching the age of 90 years three months and fourteen days. She was one of five daughters in the family. Edna attended grade school at District 53 one mile south of their home. She and her sisters walked to school every day. She graduated from Friend High School in 1943. While going to high school in the winter they often stayed in Friend because of the condition of the roads. Her father picked them up on the weekend. She took normal training as a senior in high school which enabled her to teach grade school until her marriage. Edna met Anton Capek at her sister Helen’s wedding to Ed Smith, who was Anton’s first cousin. Anton enlisted in the Marines and they corresponded during his time in the service and fell in love. They were married at the home of the bride on April 8, 1947. They made their first home one mile south two miles west and ¾ mile south of Milligan which was called the Cecrle place. They were blessed with a daughter Jeanette Ann and a son Raymond John. In 1959 they moved to the home place when Anton Sr. and Agnes moved to town. They lived on the home place until August of 1975 when Ray and his wife Jan moved to the farm. Anton and Edna then resided four miles east and two miles south of Geneva. After a courageous battle with cancer, Anton passed away on May 14, 1979. Edna continued to live on the farm and worked at Heritage Crossings for fifteen years, first as a cook and then doing laundry. During her years of employment she made many good friends. Edna enjoyed traveling with her daughter and cousin and many memories were made. Edna moved to Sunshine Villa in Milligan in March of 1996. She resided there until her move to Heritage Crossing in October of 2012 due to failing health. Leaving the Villa, was a hard decision for Edna as it had been her home for many years and many wonderful friends were made. They were like a family. Her move to Heritage was an adjustment, she thought they came into her room way too much, but she soon made friends and then welcomed their appearance. Edna was a wonderful mother, grandma and great grandma. She was always there for her children. Jeanette remembers all of the guidance she gave, the things she taught her and the unconditional love she gave. Memories of her mother will be in her heart forever. Ray, being a true boy, was ornery and loved to tease. She always said that it was his father coming out in him. She loved every minute of it. He was fiercely loyal to her and he would move mountains for her if he could. She was a wonderful cook teaching her daughter-in-law how to make a tasty kraut and dumplings, and wonderful dressing. Her grandsons were convinced she could put Col. Sander’s chicken to shame. Her kolache were mouth watering and disappeared quickly at any gathering. Ann stayed with grandma while her mother worked out of the home and both Ann and Shelly cherished every minute they spent with grandma. Edna loved to garden, canning its bounty, work with her flowers, raise chickens and ducks and enjoy the great outdoors. She loved to crochet and made each of the grandchildren an afghan which they cherish. She and Tony loved to dance and would regularly go to polka dances with their neighbors and friends. They also loved to attend the Burwell rodeo and did so many times. Edna was a member of the Milligan American Legion Auxiliary, Milligan Juniors Extension Club, the Western Fraternal Life Association – Z.C.B.J. Lodge, and the Milligan Methodist Church. Edna was preceded in death by her parents, husband Anton Capek Jr. her sisters Helen, Emma and Mary brothers-in-law, Ed Smith, Willard Engel, Milo Nejdl and Henry Hayek and sister-in-law Irma Hayek. She is survived by her daughter, Jeanette Cornell of Grand Island, son Ray and daughter-in-law Jan of Milligan, grandsons Jason Capek of Shelton, NE. Justin and wife Melissa of Ohiowa, NE, Jon and wife Audra of Carleton, NE and Josh Capek of Tobias. Granddaughters Ann Tagliaferro and husband Tony of Commerce City CO, Shelly and husband Mike of Kenesaw NE and sister Olga Nejdl of Crete, NE. Also eleven great-grandchildren and many relatives and friends. Funeral services for Edna were held on Friday, May 13, 2016 at 10:30 a.m. at the United Methodist Church in Milligan. Pastor Brad Barrows officiated the services. Deb Brunkow accompanied the congregation in the singing of “Amazing Grace,” “Abide With Me,” and “Hymn Of Promise.” Pallbearers for the service included Jason Capek, Justin Capek, Jon Capek, Josh Capek, Roger Capek, and Glen Capek. Honorary bearers were Larry Capek, Gerald Capek, Tony Tagliaferro, and Mike Hansen. Interment was held in the Bohemian National Cemetery. Memorials are directed to the United Methodist Church, the Milligan American Legion, or the Milligan Library. Farmer & Son Funeral Home conducted the services. Online condolences may be left at www.farmerandsonfuneralhome.com.

Edna Anna Capek was born on January 26, 1926 to Joseph and Emma (Filipi) Zumpfe at the family farm south of Friend, NE. She passed away on May 9, 2016 at the Heritage Crossing in Geneva, NE reaching the age of 90 years three months and fourteen... View Obituary & Service Information

The family of Edna A. Capek created this Life Tributes page to make it easy to share your memories.