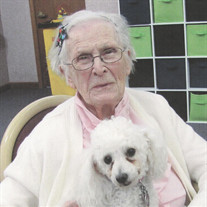 Edna Ida Molthan was born June 4, 1922, to William and Clara (Judy) Whitmore in Davenport, Nebraska. She passed from this life Sunday, August 9, 2015, at the Happy Siesta Care Center in Remsen, Iowa at the age of 93 years. She attended country school and graduated from Davenport High School in 1940. Edna found her way to New York to attend the school of nursing at Kings County Hospital graduating in 1945, and then returning to Nebraska. Edna was united in marriage to Orville Dale Molthan on May 28, 1947, and to this union four children were born: Larry, Rene, Debra and Warren. Edna spent many of her days taking care of others. She owned and operated the Molthan Nursing Home in Bruning for many years and then moving to Lincoln, Nebraska where she continued working in nursing homes and with home health agencies. When she wasn’t working she enjoyed taking trips, gardening, playing cards, dancing with friends and being with her family. Edna was preceded in death by her parents and six siblings; husband Orville and sons Rene and Warren. She is survived by her son and daughter-in-law Larry and Marilyn Molthan of Le Mars, Iowa, daughter-in-law Jill Molthan of Bruning, and daughter Debra Molthan of Lincoln; three grandchildren, Cassidy and husband Charles Hoffschneider, Carrie and husband Todd Cernin and Cholly and husband Matt Partridge; two step grandchildren Lisa Wise and Rob Wiese; three great grandchildren Hannah, Morgan and Evan Hoffschneider and three step great grandchildren Nikki, Blaine and Michael and by numerous nieces, nephews and friends. Funeral services were conducted from the United Methodist Church in Bruning, Nebraska on Friday, August 14, 2015 with Kim Dunker officiating. Linda Dudgeon accompanied the congregation who sang, The Old Rugged Cross, In the Garden and Amazing Grace. Pallbearers were Robert Molthan, Robert Fayle, Robert Hinrichs, Mark Hinrichs, Kevin Schoenholz and Blaine Wise. Burial was in the Bruning Public Cemetery with Farmer & Son Funeral Home in charge of the arrangements. Memorials are directed to the family

Edna Ida Molthan was born June 4, 1922, to William and Clara (Judy) Whitmore in Davenport, Nebraska. She passed from this life Sunday, August 9, 2015, at the Happy Siesta Care Center in Remsen, Iowa at the age of 93 years. She attended country... View Obituary & Service Information

The family of Edna I. Molthan created this Life Tributes page to make it easy to share your memories.

Send flowers to the Molthan family.