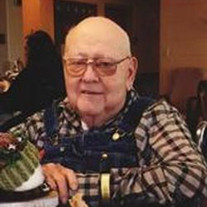 Edward Leland Sieckmann was born Nov. 6, 1926 to Henry and Lottie (Krug) Sieckmann on a farm south of Ohiowa, and he passed away on May 22, 2014 in the Exeter Care Center at the age of 87 years, 6 months, and 16 days. Edward’s mother died at the age of 35 from gall bladder surgery and pneumonia when Edward was 10 months old, brothers George was 7 and Dayle was 5. He was raised by his Aunt Ida Gewecke until he was old enough to join his father and brothers, George and Dayle, on the farm, along with a neighbor, Maggie Schweer. Aunt Ida took care of the whole bunch. All three Sieckmann boys were together until they each entered the service. They all returned safely, but they decided to sell the farm and moved to Ohiowa, living there until 1970 when they moved to Geneva because of Dayle’s health. Edward cared for him until his death in Dec. 1982. Edward worked for the Nebraska Dept. of Roads until 1989 when he retired. He was a life-long member of Grace Lutheran Church, being baptized and confirmed there. He was a life member of the Veterans of Foreign Wars Post 7102 and of the American Legion Post 68 of Geneva. Edward married Betty Light on March 17, 1988 and they were privileged to celebrate their 25th Wedding anniversary. Betty was the love of his life. She was his “rock.” Edward loved to play his accordion and in his healthy years, he could fix anything and always knew facts and figures. He loved to visit and laugh. When he was little, Maggie said his name was Edward and it was not a nickname, so until he married Betty, he was Edward, but now he is Eddie-but still the same person. Edward and Betty moved to the Exeter Care Center in August, 2013 and Betty preceded him in death Dec. 30, 2013 in Exeter, NE. He was also preceded in death by his parents Henry and Lottie; and brothers George and Dayle. He leaves to mourn his sister-in- law, Janette Childers; cousins Mable Muehling and Eleanora Dittmer and their families; nephews Mark Wurst, Greg (Amy) Wurst, Jon (Debbie) Fredrick, nieces Laurel(Rob) Gower and Pamela Conroy; great-nephews, great- nieces and many friends. Funeral services for Eddie were held on Tuesday, May 27, 2014 at 10:30 a.m. at the Farmer & Son Funeral Home in Geneva. Kim Dunker officiated the services. The recorded selections “It Is Well With My Soul” and “Song Of Bohemia” were played during the service. Pallbearers for the service included Sherman Thomas, Tom Ortgies, Chris Dunker, Eric Williams, and Dale Wittrock. Honorary bearers were Greg Wurst, Mark Wurst, and Jon Fredrick. Millitary graveside services were held in the Ohiowa Public Cemetery and were performed by the Ohiowa American Legion Franklin Post 193. Memorials are directed to the Veterans of Foreign Wars Post 7102 or the Ohiowa American Legion Franklin Post 193. Farmer & Son Funeral Home was in charge of the arrangements.

The family of Edward L. Sieckmann created this Life Tributes page to make it easy to share your memories.

Send flowers to the Sieckmann family.