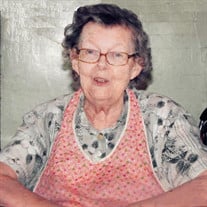 Elaine Frances Betka was born on June 29, 1934 in Exeter, NE to John and Mattie (Leif) Krejci. She passed away at Fillmore County Hospital in Geneva, NE on April 20, 2020 at the age of 85 years, 9 months, 22 days. . Elaine was married to James E. Betka of Milligan, NE on September 15, 1956. They raised four children, James J., Mary, David and Amy on their farm outside of Milligan. Elaine was the perfect example of a person that everyone wants to be. She was a homemaker who had a love for baking and canning. She was a mother and grandmother who took great pride in all of her children, grandchildren, and great-grandchildren and their accomplishments. Elaine was known as “Grandma Elaine” to not only her grandchildren, but to all of the kids that she babysat over the years. Elaine was also known for her caring nature. She was always willing to drop whatever she was doing to help everyone. Elaine will be remembered for many years by family and friends for her infectious personality, humor, compassion, faith, and a love for all. Elaine was preceded in death by her parents; brother Richard Krejci; sister Sylvia Krejci; brothers-in-law Frank Kassik and Edward Betka; and sister-in-law Norma Krejci. She is survived by her husband James E. Betka of Milligan, NE; Sons James J. Betka and wife Lynn of Milligan, and David Betka and wife Ann of Friend; Daughters Mary Wince and husband Rick of Exeter, NE and Amy Engle and husband Tim of Geneva, NE; Grandchildren and great-grandchildren are Ranae Due and husband Bob and their children Jillian and Danica, Derek Wince and wife Amanda and their children, Reed, Ryker, and Rexton, Brandon Betka and wife Kara, Logan Betka and wife Mikaela and son Baker, Alicia Betka and fiancé David Gay, Alaina Betka, Jaime Jaeger and husband Gabe and their children Graham and Mackenzie, Josh Betka and wife Megan, Brady Engle, and Megan Engle and boyfriend Lupe Dimas; sister Margaret Kassik; Brothers Donald Krejci and wife Elaine. David Krejci and wife Jan, Linus Krejci and wife Shirley; and sisters-in-law Barb Krejci and LaRae Betka; and many nieces and nephews. A Funeral Mass for Elaine was held on Thursday, April 23, 2020 at 10:30 a.m. at St. Wenceslaus Catholic Church. A Rosary was prayed prior to the Mass. Father Harlan Waskowiak was the officiant for the service. Karen Filipi provided the music and the songs included “Seek Ye First,” “Here I Am Lord,” “You Are Mine,” and “Song Of Farewell.” Pallbearers for the service included Brandon Betka, Derek Wince, Josh Betka, Logan Betka, Brady Engle, Gabe Jaeger, Lupe Dimas, Bob Due, and Cody Filipi. Interment was held in the Bohemian National Cemetery, Milligan, Nebraska, following the Funeral Mass. Farmer & Son Funeral Home was in care of the arrangements and online condolences can be left at www.farmerandsonfuneralhome.com Memorials are suggested to the family for future designation.

The family of Elaine F. Betka created this Life Tributes page to make it easy to share your memories.

Send flowers to the Betka family.