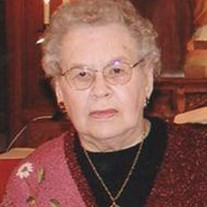 Laverna Elaine Boyes was born to Edwin Manthei and Edna Dahlgren Manthei on June 3, 1924, near Sutton, Nebraska and passed away April 2, 2014, at Heritage Crossings in Geneva, Nebraska at the age of 89 years, 9 months and 30 days.  She was one of 5 children in the family  Elaine attended country school and graduated from Sutton High School. Elaine was married to Kenneth Boyes of Geneva on April 26, 1946 and to them 5 children were born. Elaine was a member of Grace Lutheran Church in Geneva.   She was an active member of the Ladies Aid for many years. Elaine was a dedicated farm wife who helped out with the chores and assisted wherever needed.  She enjoyed working in her flower and vegetable gardens and looked forward to her first tomato.  She loved to bake, especially her delicious sweet rolls.  Her family and grandchildren were her pride and joy. Elaine was preceded in death by her parents, husband Kenneth, two brothers Gerald and Dwight, one sister Kathleen and infant son Gary. She is survived by three sons, Tom of York, Ron and wife Gloria, Robert and wife Joyce and daughter Debra all of Geneva.  Brother Dwain Manthei of Sutton.  Sister-in-law Lola Bauer of Geneva, Brother-in-law and Sister-in-law Charles and Nadine Boyes of Syracuse.  Grandchildren: Richard of Overland Park, Kansas, Jenny West of Fairmont, Tony and wife Stephanie of Lincoln, Jessica of Geneva, Ginger and husband Andy Cowles of Omaha, Chad and wife Nichole of Bennington, Nick of Omaha, Kyle of Geneva. Great Grandchildren MaKenna, Kynsley, Katelyn, Ethan, Brayden, Nevaeh, Simeon, Nola, Scarlett and Abby.            Funeral service for Elaine will be 10:30 a.m. Monday, April 7, 2014 at the Grace Lutheran Church in Geneva, Nebraska.  Interment will follow the service at the Geneva Public Cemetery.  Visitation will begin Sunday from 1:00 p.m. unitl 8:00 p.m. at the Farmer & Son Funeral Home in Geneva.  Memorials are directed to the Grace Lutheran School.

Laverna Elaine Boyes was born to Edwin Manthei and Edna Dahlgren Manthei on June 3, 1924, near Sutton, Nebraska and passed away April 2, 2014, at Heritage Crossings in Geneva, Nebraska at the age of 89 years, 9 months and 30 days.  She was one... View Obituary & Service Information

The family of Elaine L. Boyes created this Life Tributes page to make it easy to share your memories.

Send flowers to the Boyes family.