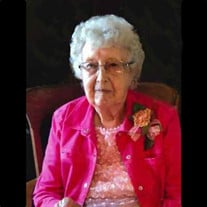 Elaine Jeanette (Kamler) Bumgarner Ebbeka was born to Herman and Verona (Weis) Kamler on July 16, 1922 in Fillmore County. She passed away at Heritage Crossings at the age of 99 years and 3 days. She was one of 2 children in the family. She was raised on a farm near the Shickley-Turkey Creek area where she also attended a country school and belonged to St. Mary’s Catholic church. On November 30, 1940, Elaine married Russell Bumgarner of Strang, NE where they made their home. Born to this union were two children: Charles Lee and Connie Sue. Elaine spent her life loving the farm and all that came with it, including raising chickens, milking cows, and gardening. Her home-canned green beans were a favorite across 4 generations! Feeding cattle were what Russ and she were known for around the countryside. They also loved going dancing and the occasional horse race. She spent lots of time at the ball field watching her kids play and Russ coach. Elaine also belonged to the Belle Prairie Extension Club and a Sewing Club. At the age of 53, Russ passed away suddenly from a heart attack, leaving her alone on the farm. Being the strong person that she was, she continued to stay there. She started bowling and enjoyed her children getting married and having grandkids. With a big heart, she was always there to help. On December 28, 1984, she married Ken Ebbeka, growing her family and influence to include three new step children. Ken and she stayed on the farm as they continued their life together. Some of the things they enjoyed most were going dancing and hitting the casinos from time to time. Elaine was a member of both the Hospital and VFW Auxiliaries as well. In February 2017, they decided to move to assisted living at Heritage Crossings in Geneva. She got to enjoy the freedoms that provided her for a couple of years until her failing health moved her to skilled care. Elaine was preceded in death by her parents, husband Russell, son Charles, son-in-law Larry Fiala, sister and brother-in-laws Viola & Jerry McLaughlin, brother-in-law and sister-in-law Mervell & Betty Bumgarner, and step grandchild Tabitha Van Pelt. She is survived by her husband Ken; daughter Connie and companion Jr. Gray; grandchildren Lance Fiala (Dana) of Strang NE and Laci Fiala (Aaron Liebeck) of North Canton, OH; great grandchildren, Raegan, Taryn, & Layton Fiala as well as Addison Ades and Sutton & Collin Liebeck; step-daughters Nancy Gewecke (Allen) and Carol Reinsch (Gary); step-son Dale Ebbeka (Cindy); 12 step-grandchildren; 27 step-great grandchildren; and 1 step-great great grandchild. A memorial service for Elaine will be held at 10:30 a.m. on Monday, July 26, 2021 at the First Congregational United Church of Christ in Geneva. Pastor Stuart Davis will officiate the Funeral Service. A graveside service will be held in the Geneva Public Cemetery following the funeral service. A Funeral Service for Elaine was held on Monday, July 26, 2021 at 10:30 a.m. at the First Congregational United Church of Christ in Geneva, Nebraska. Pastor Stuart Davis officiated the Funeral Service. Special music was provided by Laci Fiala in the singing of “Ave Maria.” The recorded selections “One Day At A Time” and “Just A Closer Walk With Thee," and "See You Again" were also played during the Funeral Service. Pallbearers for the service included Gene McLaughlin, Tom Bumgarner, Jerry Lauber, Doug Lees, Brad Brush, and Dayle DuBois. Honorary pallbearers included Addison Ades, Sutton Liebeck, Collin Liebeck, Raegan Fiala, Taryn Fiala, and Layton Fiala. Interment was held in the Geneva Public Cemetery following the Funeral Service. Farmer & Son Funeral Home was in care of the arrangements and online condolences can be left at www.farmerandsonfuneralhome.com Memorials are suggested to the Fillmore County Hospital Auxiliary or the Geneva VFW Auxiliary.

Elaine Jeanette (Kamler) Bumgarner Ebbeka was born to Herman and Verona (Weis) Kamler on July 16, 1922 in Fillmore County. She passed away at Heritage Crossings at the age of 99 years and 3 days. She was one of 2 children in the family. She... View Obituary & Service Information

The family of Elaine J. Ebbeka created this Life Tributes page to make it easy to share your memories.

Send flowers to the Ebbeka family.