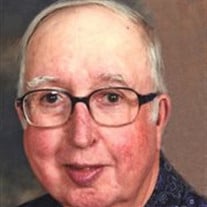 Funeral services for Elden will be on Wednesday, August 13, 2014 at 10:30 a.m. at the United Methodist Church in Shickley, Nebraska. Pastor Scharleen Cross will officiate the service. Graveside services will follow the funeral in the Swedish Cemetery, rural Shickley, Nebraska. Visitation will be Tuesday from 1:00 p.m. to 8:00 p.m. with family present from 6 - 8 p.m. at the Farmer & Son Funeral Home in Geneva. Memorials are directed to the Fillmore County Relay for Life or the Fillmore County Hospital Foundation. Elden Dean Walters was born to Kenneth Walters and Fern L. Boo Walters on May 7, 1943, at Shickley, Nebraska, and passed away August 8, 2014 at Fillmore County Hospital in Geneva, Nebraska, at the age of 71 years, 3 months and 1 day. He was one of 2 children in the family. Elden graduated from Shickley High School in 1961. Soon after high school he was drafted into the Army and was sent to Vietnam. After the service he returned to Shickley to farm with his grandfather and father, and eventually his nephew John became part of the farming operation. At the time of his death it was just Elden and John. Farming was his life, he ate, breathed and slept farming. Nearly every conversation was about the price of corn or the lack of rain. In 2008 he was diagnosed with prostate cancer, he got the diagnosis the day after Christmas and he chose radiation for treatment. He drove to Lincoln everyday five days a week for three months, usually by himself even in the snow and ice, he was just glad it was in the winter and he would get done with his treatment before planting started. He had 2 nephews John and Chris who he always attended their school and sporting events when they were young. John liked to ride with him in the tractor. Elden would tell about John crawling up and sleeping in the space in the back of the cab, but he had to be out there with Uncle Elden. On January 11, 1992 Elden married Melea Peppard. With this union he gained a daughter Lacee Dianne. On September 18, 1993 he adopted Lacee. They formed an instant lasting bond. It was kind of like a club no one else could be a part of. Elden also gained a whole new family and some more nephews and nieces. And each one of them have their own Uncle Elden story. Elden was known for his sense of humor and his comments that he usually got in trouble for. His nephew John has three children Alexandra, Samantha, and Austin who just lived down the road. They had a special place in his heart, he spent quite a bit of time with them. He tried to attend all their school and fair events. His nephew Chris has a daughter Kamryn who didn’t live as close but was still special to him. In the last few years he had been taking 2 days off during harvest to go to Kansas City to go to the Nascar races. He and Melea had season tickets, but they always had to get right back for harvest. On June 24, 2006 he gained a son in law Michael Yendra, who looked up to him like a second father. On February 11, 2011, Annabella Grace Yendra was born, weighing in at a whopping 1 pound 9 ounces, and she had “papa” wrapped around her finger from day one. And she seemed to change his priorities some. He even took off 2 weeks last November and went to Disney World, and he didn’t like to be gone overnight. He was also planning to go again this year. Annabella adored him, and she did her best to walk like him, dress like him,and talk like him, including swear like him. These things delighted him even more. The two of them had just had “lunch” together right before he went out to the field that last time. Elden was a good man. Someone in the family said he was a “gentle man and a gentleman.” He was a wonderful, caring husband, father, grandfather, uncle and brother-in-law, and he will be terribly missed by his family. He was truly loved. Elden was preceded in death by his parents Kenneth and Fern and by his sister Marlene Walters. He is survived by his wife Melea of Shickley; daughter Lacee and Michael Yendra of Holdrege and granddaughter Annabella Grace Yendra of Holdrege; Nephews John Plock of Shickley and Chris and Kristen Plock of Lincoln; Brothers-in-law Mike and Theresa Peppard of Lincoln, Marty and Kathy Peppard of Geneva and Monty and Dianna Peppard of Beatrice; nieces and nephews Matthew Epp, Justin Peppard, Lindsey Peppard, Shane Peppard, Whitney Peppard, Amber Lovelace, Logan Peppard, and Shelby Walton; great nieces and nephew Alexandra Benson, Samantha Plock, Austin Plock, and Kamryn Plock; and great great nephew Shawn Benson and great great niece Marley Epp.

Funeral services for Elden will be on Wednesday, August 13, 2014 at 10:30 a.m. at the United Methodist Church in Shickley, Nebraska. Pastor Scharleen Cross will officiate the service. Graveside services will follow the funeral in the Swedish... View Obituary & Service Information

The family of Elden D. Walters created this Life Tributes page to make it easy to share your memories.

Send flowers to the Walters family.