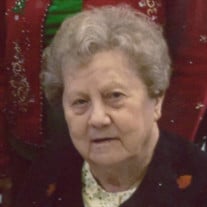 Funeral service for Eleanor will be 2:00 p.m. Saturday, April 15, 2017, at the Farmer Funeral Home in Exeter, Nebraska with Kim Dunker officiating. Graveside service will follow at the Exeter Cemetery. Visitation will begin Friday, 3 pm until 8 pm with family greeting friends from 5 to 7 at the Farmer Funeral Home in Exeter, Nebraska Memorials are directed to the Adopt - A - Pet in York, Nebraska Eleanor Rose Engle Becker was born to Constantine (Alex) and Emma (Svehla) Engle on September 21, 1929, on a farm near Fairmont, NE, and passed away on April 12, 2017, at Thayer County Health Services in Hebron, NE, at the age of 87 years, 6 months, and 20 days. She was the fourth of eight children in the family. Eleanor’s parents moved east of Geneva where she attended country school District #68 through eighth grade. She graduated from Geneva High School with the Class of 1946. She then attended one year of Normal Training before teaching three years at District #68 where she taught three younger siblings--Willis, Anna, and Mary. Eleanor met her future husband, Arlan, at a dance in Buress, NE. Their first date was to the Fillmore County Fair. They dated for twenty months and were engaged for nine months before Eleanor married Arlan Joseph Becker on June 21, 1949, at St. Stephen Catholic Church, Exeter, NE by Father Durr. They made their home in Exeter, NE, and lived in the same house their entire married life. Eleanor worked at Smith’s Tag Factory for 7 ½ years, was an Avon representative for 3 ½ years, and then became proprietor of their Gift & Thrift Store in Exeter. You often would see them at area auctions. Her home and yard were her pride and joy, even after suffering a major stroke in 1979 which left her handicapped. Eleanor and Arlan enjoyed country western music and dancing. Many Saturday nights you could find them at the Border Inn where Boxcar Willie (aka Marty Martin) from Lincoln, NE, and Bob O’Neill and the Playboys from Hebron, NE, played. Eleanor and Arlan took Mother Engle to the Black Hills on a vacation to visit relatives. Although they had no children, many nieces and nephews would spend part of summer at their home. She liked to go to the swimming pool with them. Horseback riding was another favorite pastime. Eleanor was preceded in death by her husband of 67 years, Arlan; parents Constantine and Emma; brother, Frank Engle; brothers and wives, George and Phyllis Engle; Harold and Helen Engle, Willis and Beth Engle; sister and husband, Ruth and Delbert Sorge; sister, Anna Vnoucek; brothers-in-law, Ronald D. Uldrich; Roland (Jake) Becker, Donald Becker, James Loukota, Robert Weichert; sister-in-law and husband, Loretta and Lyle Farrell. Eleanor is survived by her youngest sister, Mary L. Uldrich, of Milligan, NE; brother-in-law, Joe Vnoucek; and many nieces, nephews, and friends

Funeral service for Eleanor will be 2:00 p.m. Saturday, April 15, 2017, at the Farmer Funeral Home in Exeter, Nebraska with Kim Dunker officiating. Graveside service will follow at the Exeter Cemetery. Visitation will begin Friday, 3 pm until... View Obituary & Service Information

The family of Eleanor R. Becker created this Life Tributes page to make it easy to share your memories.

Funeral service for Eleanor will be 2:00 p.m. Saturday, April...

Send flowers to the Becker family.