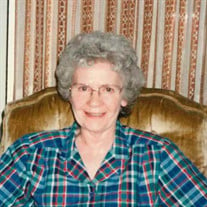 A Mass of Christian Burial will be held for Blondie on Thursday, January 20, 2022 at 2:00 p.m. at St. Stephen Catholic Church in Exeter, Nebraska with Father Brendan Kelly presiding. Praying of the Rosary will be held prior to the mass at 1:30 p.m. on Thursday, January 20, 2022 at St. Stephen Catholic Church in Exeter, Nebraska. Visitation will be held on Wednesday, January 19, 2022 from 1:00 p.m. until 8:00 p.m. at Farmer Funeral Home in Exeter, Nebraska. Graveside Services will be conducted following the funeral mass in the Exeter Cemetery in Exeter, Nebraska. Memorials are to be directed to the Alzheimer's Association or to St. Stephen Catholic Church. To view the Livestream Video you can go to Farmer & Son Funeral Home's Facebook Page or in your search engine type @friendlyfuneraldirectors and click the link to Farmer & Son or click this link https://www.facebook.com/friendlyfuneraldirectors/Funeral and it should direct you to our Facebook Page. St. Stephen Catholic Church Zoom Link: https://us02web.zoom.us/j/699903609?pwd=VDU5c3FMS253OGhNVUg0WUxNK3MyQT09#success Meeting ID: 699 903 609 Passcode: 758292 Eleanor Mae “Blondie” Erdkamp was born to Theodore and Krista Christensen on July 13, 1931 on the Cooper farm in Grove Township, Adair County, Iowa and passed away on January 15, 2022 at Heritage Crossings in Geneva, NE at the age of 90 years, 6 months and 2 days. She was one of 13 children in the family. Blondie grew up on a farm north of Menlo, Iowa and attended grade school in Menlo and Stuart, Iowa through the eighth grade and graduated from Stuart High School in 1949. Blondie was baptized at St. Mary’s Catholic Church in Lincoln in January of 1951. Blondie was united in marriage to Richard E. Erdkamp of Exeter, NE on January 20, 1951 and to this union 8 children were born. The number 8 was a pretty significant number in the Erdkamp household. Five of the eight children were born on the eighth day of the month and her husband Richard passed away in 1987 on December 8th. Richard and Eleanor lived in Colorado Springs, Colorado, Omaha, Nebraska and Burress, Nebraska before settling in Exeter, Nebraska where she would spend the rest of her life until moving into Heritage Crossings Assisted Living in Geneva in 2011. Blondie belonged to St. Stephen’s Catholic Church and was a member of St. Stephen’s Altar Society. Her greatest joy was cooking and baking for her family. She was a marvelous cook and a fabulous pie maker. Her children were many times greeted with homemade treats after a long day at school. She loved traveling to California to spend time with her brother Jack and his wife, Carolyn. Blondie kept books for her husband’s construction business and after Dick’s death, she worked at the nursing home in Exeter as a nursing assistant. You could also find her helping out at the Exeter Lumber Yard at times. She always had a big garden and enjoyed the fresh produce that was grown. Blondie was preceded in death by her parents, Theodore and Krista Christensen, her husband, Richard E. Erdkamp, her father and mother in law, Leo and Anna Erdkamp, 4 sisters, Edythe, Opal, Ruth (Peggy), and LIllian and seven brothers, Leroy, Wesley, Glen (Lindy), Virgil, Verle Leland, and Orville (Pete). She is survived by her sons, Richard (Marcia) Erdkamp of York, David (Pat) Erdkamp of Exeter, Dale (Julie) Erdkamp of Exeter and Paul (Becky) Erdkamp of Exeter, daughters, Krista Egging of Lincoln, Peg (John) Becker of Exeter, Mary (Tom) Bristol of Maryville, TN and Joni (Wade) Harre of Exeter. Her brother and sister in laws, Jack and Carolyn Christensen of Fremont, California and Ron and Wilma Spoerl of Longmont, Colorado. She is also survived by 22 grandchildren and 27 great grandchildren, and 2 great, great grandchildren, as well as numerous nieces, nephews and friends.

A Mass of Christian Burial will be held for Blondie on Thursday, January 20, 2022 at 2:00 p.m. at St. Stephen Catholic Church in Exeter, Nebraska with Father Brendan Kelly presiding. Praying of the Rosary will be held prior to the mass at 1:30... View Obituary & Service Information

The family of Eleanor M. "Blondie" Erdkamp created this Life Tributes page to make it easy to share your memories.

A Mass of Christian Burial will be held for Blondie on Thursday,...

Send flowers to the Erdkamp family.