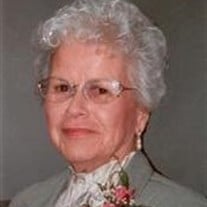 Elizabeth J. Cassidy was born to Frank and Ina Ramsey Flynn on August 27, 1919 at Ord, Nebraska, and passed away August 6, 2011 at the Fairview Manor in Fairmont, Nebraska at the age of 91 years and 11 months. She was one of 12 children in the family. Elizabeth attended a rural school in Valley County and graduated from Ord High School in 1937. In high school, she took Normal Training classes and then taught for six years after graduation. She was united in marriage to Gordon Cassidy of Burwell at Broken Bow, Nebraska on June 18, 1941. To this union three children were born. In 1949 Gordon and Elizabeth moved to Fairmont and purchased the Fairmont Cleaners, which they ran for several years in two different locations on Main Street. After selling the cleaning establishment, they bought the Tower Café in 1961. Several years later they sold the café and Elizabeth worked for the Jerry Smith Standard Oil Company as a bookkeeper. One of her greatest joys was when she opened a gift shop called “Trellis Treasures” which she ran until her husband’s health began to fail. Elizabeth was a member the Fairmont Community Church, Star Rebekah Lodge, American Legion Auxiliary for over 50 years. She was a lifetime member of the Historical Society of which she spent many years in redecorating the museums and assisted in many museum projects in Fairmont. Elizabeth was preceded in death by her husband, Gordon, her parents, brothers Merrill of Nevada, Iowa, Dean of California, Bill of Denver, Colorado, and James of Boone, Iowa; sisters LaVonne Morrow of Pacific Palisades, California, Carol Leonard of Mesa, Arizona, Doris Cummins of Mesa, Arizona, Dola Vodehnal of Ord, Nebraska, Delta Marie Page of Dodge Center, Minnesota, and Betty Livingstone of Fairmont, Nebraska. Daughter, Judy and husband Steve Fisher of Kearney, Nebraska, son Fr. James Cassidy of Minneapolis, Minnesota, and son David and wife Shelly Cassidy of Fairmont, Nebraska survive her. She is also survived by grandchildren Tim Fisher and wife Lori of Plainsboro, New Jersey, Christine Fisher of Grand Island, Nebraska, Michael Fisher of Eugene, Oregon, Thomas Fisher of Kearney, Nebraska, Joni Anderson and husband Cole of Sutton, Nebraska, Abbie Cassidy of Lincoln, Nebraska, and Jenna Cassidy of Lincoln, Nebraska. Two great grandsons, Jonathan and Andrew Fisher of Plainsboro, New Jersey, also survive her. Elizabeth has one brother, Lyle Flynn of Boone, Iowa surviving as well as numerous nephews, nieces and cousins. Services for Elizabeth will be Thursday, August 11, 2011, at 10:30 a.m. at the Fairmont Community Church in Fairmont, Nebraska. Public visitation will begin Wednesday at 1:00 p.m. until 8:00 p.m. at the Farmer & Son Funeral Home in Geneva, Nebraska with family greeting friends from 6:00 to 8:00. Interment will be in the Fairmont Public Cemetery. In lieu of flowers, memorials preferred to Arm in Arm In Africa. Checks can be made out to Arm In Arm In Africa and sent to 3415 Fordham Ct. N.E., Mpls., MN., 55421. To donate online go to AIAIA.org and click on Donate Today or to the Fairview Manor.

Elizabeth J. Cassidy was born to Frank and Ina Ramsey Flynn on August 27, 1919 at Ord, Nebraska, and passed away August 6, 2011 at the Fairview Manor in Fairmont, Nebraska at the age of 91 years and 11 months. She was one of 12 children in... View Obituary & Service Information

The family of Elizabeth J. Cassidy created this Life Tributes page to make it easy to share your memories.

Elizabeth J. Cassidy was born to Frank and Ina Ramsey Flynn on...

Send flowers to the Cassidy family.