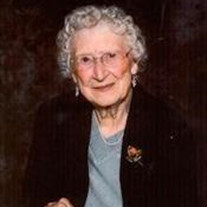 Funeral services for Ella will be held on Saturday, June 1, 2013 at 10:00 a.m. at the Trinity Lutheran Church in Bruning, Nebraska. Graveside services will follow the funeral in the Trinity Lutheran Cemetery, Bruning. Public visitation will begin at 1:00 p.m. until 8:00 p.m. on Friday, May 31, at the Farmer & Son Funeral Home in Geneva, Nebraska Ella Hinrichs Garrels was born to Gerd and Louisa Kuhlmann Hinrichs on December 9, 1910, on a farm that later became the Bruning Air Base. She passed away May 29, 2013, at Blue Valley Lutheran Nursing Home in Hebron, Nebraska, at the age of 102 years, 5 months and 20 days. She was the youngest of seven children in the family. Ella lived her whole life in the Bruning area. She was baptized and then confirmed in both German and English from Grace Lutheran Church, Ohiowa. She chose 2nd Corinthians Verse 9 as her confirmation verse: “God’s grace is sufficient for thee.” She attended school at County Line Country School until an illness during her freshman year. Ella worked for the family and many fellow neighbors over the years before entering into marriage with Martin H. Garrels on September 1, 1935. To this union, one daughter, Faye Crystal, was born on September 20, 1944. Ella and Martin lived in Bruning all their life except one year spent in Washington State where Martin served in the World War II effort. She worked for many family members performing farm duties including picking corn by hand with horses, milking cows, raising chickens, gardening, and taking care of children. She worked at the Bruning Locker, Messman Produce in Strang doing egg candling, and Bruning Grocery for several different owners before retiring. Ella had a strong Christian faith. She was an active member of Ladies Aid and Woman’s Circle. She taught Sunday School and Bible School for both Grace and Trinity Churches. Her favorite hobby was tending to many varieties of flowers. Ella attended dances throughout the surrounding area and could play the ukulele. Later in life, she enjoyed traveling and taking part in bus tours. She loved spending time with her grandchildren and great-grandchildren and was always interested and proud of them in their activities. She never missed a Grandparents Day celebration. After Martin’s death, Ella lived many years in her home before entering the Blue Valley Lutheran Nursing Home in December 2012, shortly before her 102nd birthday. Ella had a sweet, caring nature and was known for her generosity to all her neighbors and friends. She will be deeply missed by all who knew her. She was preceded in death by her parents Gerd and Louisa Hinrichs, husband, Martin, son-in-laws, Verlyn Hintz and Edwin Clayton. Ella was the last surviving sibling in her family. Surviving family members are daughter Faye Hintz Clayton of Bruning, grandchildren Kyle Hintz and wife Cindy of Bruning, Kory Hintz and wife Cherie of Bruning, Kara Edwards and husband James of Hebron, and Kren Shellhase and husband Hunter of Lincoln, great-grandchildren Ryan Bolles and wife Lorelei, Jason Pace and wife Cristyna, Trevor and Gavin Hintz, Peyton and Bode Edwards, and Presley Shellhase, and many great-great grandchildren, nieces, nephews, and friends.

The family of Ella E. Garrels created this Life Tributes page to make it easy to share your memories.

Send flowers to the Garrels family.