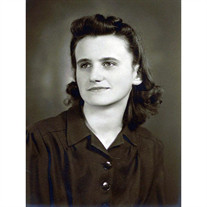 Public Graveside services for Elma will be held on Tuesday, October 6, 2015 at 10:30 a.m. at the Atlanta Cemetery, rural Milligan, Nebraska. A Rosary will be prayed at 7:00 p.m., Monday, October 5, 2015 at Farmer & Son Funeral Home - Kotas Chapel in Milligan. Memorial are directed to the Capitol Human Society in Lincoln, Nebraska. Elma Rose Vavra was born to Emil Krisl, Sr. and Julia (Vejraska) Krisl on February 17, 1924, at Western, Nebraska, and passed away on Saturday, October 3, 2015 at Heritage Crossings in Geneva, Nebraska at the age of 91 years, 7 months, and 16 days. She was one of five children in the family. Elma attended rural schools and graduated from Geneva High School in 1941. She attended college for one year. She worked outside of the home for most of her adult life doing various occupations. During World War II she attended a radio/teletype school in Omaha, after which she worked as a teletype operator, first at Wright Air Field, Dayton, Ohio, and then at Fairmont Air Field, Fairmont, Nebraska. Later in life, while she and her family lived in Houston, Texas, Elma became a medical transcriptionist at M.D. Anderson Hospital. She continued this occupation for over 30 years working at various hospitals and then she continued this profession working at home via computer well past retirement age. Elma was married to Darrell Daniel Vavra of Milligan, Nebraska at St. Wenceslaus Catholic Church on January 14, 1953. To them two children were born. Elma was preceded in death by her parents; husband, Darrell; brother, Emil Krisl, Jr. and wife, Jean; sisters Emma Schropfer and husband, Jim; Alice Mussman and husband, Kermit; Erma Thomas and husband, Melvin; and brother-in-law Armand Vavra. She is survived by son Robert and wife Mary of Hermitage, Tennessee; daughter, Joan and husband, Richard O’Shea of Alexandria, Virginia; granddaughter, Sally and husband Robert Stocker of Colorado Springs, Colorado; grandson Thomas O’Shea of Alexandria, Virginia; great-granddaughter, Natasha Stocker of Colorado Springs, Colorado; brother and sister-in-law, Melvin and Arlene Vavra of Milligan, Nebraska; and many nieces and nephews.

The family of Elma R. Vavra created this Life Tributes page to make it easy to share your memories.

Public Graveside services for Elma will be held on Tuesday, October...