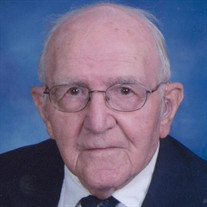 Funeral Services for Elmer will be held on Saturday, April 8, 2017 at 10:30 a.m. at the United Methodist Church in Geneva, Nebraska with Pastor Michelle Gowin officiating the service. Visitation will be held on Friday, April 7, 2017 at Farmer & Son Funeral Home in Geneva from 1:00 p.m. until 8:00 p.m. with family greeting the public from 5:00 p.m. until 7:00 p.m. Military Graveside Service will be held at the Geneva Public Cemetery. Memorials are to be directed to the family for a later designation. Elmer Dockter was born to August Dockter and Edna Elizabeth (Ochsner) Dockter on February 12, 1920 at Arena, North Dakota and passed away April 5, 2017 at Heritage Crossings in Geneva, Nebraska at the age of 97 years. He was the fourth of 7 children in the family. At age 8 years his family moved to Sutton, Nebraska and later settled on a farm between Grafton and Geneva, Nebraska. He attended District 7 country school and graduated from Geneva High School in 1940. He enjoyed living on the farm and loved to reminisce of days growing up and working on the farm, helping his father. He did start veterinary school at the University of Nebraska but later enlisted in the United States Navy due to no jobs after the dirty thirties. He was stationed in the Pacific near Guadalcanal with PT Squadron 11 as Chief Gunner's mate. Elmer served his country for 6 years and 4 days, 36 months were at sea on his PT Boat. He was wounded toward the end of WW2, recovered stateside at Boston and was sent to complete his tour of duty at the munitions depot at New Orleans, Louisiana. Elmer received the Good Conduct Medal, American Defense Medal, American Area Campaign Medal, European Mid-East Campaign Medal Medal-Asiatic Pacific Area and the Coral Sea Battle with 2 Stars. On Sept 15, 1944 on a leave he was married to Wilma Arlene Hagrman at the Fillmore County Courthouse, and to them 8 children were born. After an honorable discharge the couple moved to Aurora, Nebraska where he worked as a mechanic, later he was hired by the railroad. In 1956 the family was relocated to Ravenna, Nebraska where he was a brakeman and later conductor. In 1974 they moved to Lincoln, Nebraska and Elmer retired from the railroad in 1980. In 2003 Elmer and Wilma decided to move back to Geneva, Nebraska. Elmer loved to be outdoors fishing and hunting, enjoyed playing and watching baseball and took his family on many wonderful vacations during the summers. For many years the family enjoyed a cabin at Sherman Dam at Loup City, Nebraska with wonderful outdoor memories and neighborhood and fish fries held at the closing of the cabin each fall. He enjoyed Husker football and any basketball games he could find on television. Elmer always enjoyed going to the Geneva Alumni Banquets and always wore his high school letter jacket. Elmer was always active in the United Methodist Church, Legion and VFW in the various communities he lived in, was always a kind and loving husband, father, grandpa and great grandpa. He always had a story to share with any one who would listen and had a great sense of humor and he was a blessing to many as an encourager. Elmer was preceded in death by his wife of 68 years, triplet infant sons, siblings Benjamin, Edward, Erna Riberio, Esther Emerson, Raymond and Marvin. Survivors include his son Larry (Susan) of North Manchester, Indiana, daughters Linda (Norm) Bartunek of Camdenton, MO, Donna (John) King of Ravenna, NE, Nancy (Tony) Price and Carol (Scott) Voss all of Lincoln, NE, 10 grandchildren, 18 great grandchildren, and many nieces, nephews and so many friends and family at Heritage Crossings.

Funeral Services for Elmer will be held on Saturday, April 8, 2017 at 10:30 a.m. at the United Methodist Church in Geneva, Nebraska with Pastor Michelle Gowin officiating the service. Visitation will be held on Friday, April 7, 2017 at Farmer... View Obituary & Service Information

The family of Elmer Dockter created this Life Tributes page to make it easy to share your memories.

Funeral Services for Elmer will be held on Saturday, April 8,...

Send flowers to the Dockter family.