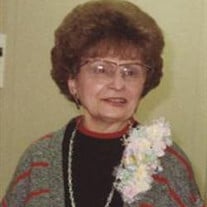 Memorial services will be 10:30 a.m., Friday, May 16, 2014, at the St. Wenceslaus Catholic Church in Milligan, Nebraska. Rosary service will be held 10 a.m., Friday, at the church, prior to the funeral mass. Private family graveside will be held at the Bohemian National Cemetery, Milligan, Nebraska. No public visitation-cremation. Memorials are in care of Elsie's family. Elsie Marie Cecrle was born to Joseph V. Cecrle and Mary (Kasik) Cecrle on December 16, 1920. She passed away May 4, 2014 at the Legacy Terrace in Lincoln, Nebraska at the age of 93 years, 4 months and 18 days. Elsie graduated from Ohiowa Public School in 1938.  Upon graduation, she moved to Omaha, NE, where she worked in the offices of the United States Corps of Engineers and the War Assets Administration.  She than moved to Lincoln, NE and began her long time career with the Nebraska State Health Department on April 2, 1948.  She started out as a clerk and was the Assistant Director of Vital Statistics at the time of her retirement on April 30th, 1993. Elsie was a member of St. Mary’s Catholic Church, Lincoln, NE and the St. Francis Altar Society Circle.  She was interested in preserving her Czech heritage, and as a result was involved in numerous ethnic groups throughout the state.  Of particular interest to Elsie were the local and State Czech Queen Pageants, which she helped coordinate.  She was proud of her association with the Czech singing group, the Capital City Czech Choraliers, which she was a charter member.  She continued to participate in the activities of these groups after her retirement. Elsie was also involved with the Nebraska Czechs of Lincoln, Nebraska Czech Inc., the Heritage League of Lincoln and the Nebraska Public Health Association.  She was a member of the American Legion Auxiliary in Milligan, NE, the Eight and Forty in Lincoln and the Western Fraternal Life Association Lodge 76 of Milligan. She was preceded in death by her Parents, Joseph 1955, Mary 1980, brother Rudolph 1975, sister Emilye 1983, brother Joseph 2004, sister Rose 2007 and an infant brother at birth. She is survived by sisters Blanche Capek and Mary Ann Kronhofman, special friend Donal E “Sarge” Finn and a host of nieces, nephews, relatives and friends.,

Memorial services will be 10:30 a.m., Friday, May 16, 2014, at the St. Wenceslaus Catholic Church in Milligan, Nebraska. Rosary service will be held 10 a.m., Friday, at the church, prior to the funeral mass. Private family graveside will be... View Obituary & Service Information

The family of Elsie M. Cecrle created this Life Tributes page to make it easy to share your memories.

Send flowers to the Cecrle family.