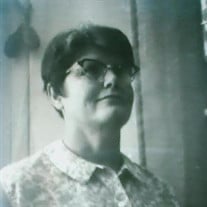 A Funeral Service for Elva will be held on Thursday, October 14, 2021 at 10:30 a.m. at the United Church of Christ in Exeter, Nebraska with Pastor Stuart Davis presiding. Visitation will be held on Wednesday, October 13, 2021 from 1:00 p.m. until 8:00 p.m. at Farmer Funeral Home in Exeter, Nebraska. Graveside Services will be conducted following the funeral service in the Exeter Cemetery in Exeter, Nebraska. Memorials are to be directed to the family to be designated at a later date. To view the Livestream Video you can go to Farmer & Son Funeral Home's Facebook Page or in your search engine type @friendlyfuneraldirectors and click the link to Farmer & Son or click this link https://www.facebook.com/friendlyfuneraldirectors/Funeral and it should direct you to our Facebook Page. Elva Blanche McBride, age 93, passed away on October 7, 2021 in Fairmont, Nebraska. She was born on March 13, 1928 in McCook, Nebraska to Albert and Lizzie (Burkholder) Meyers. She attended rural schools and graduated from McCook High School. In 1960, Elva married John McBride in McCook, Nebraska. The family moved to Fairmont, Nebraska in 1971 and Elva then moved to Exeter in 1987 after the death of her husband. Elva loved to travel, visit family and friends and play cards. Over the years she drove a school bus, was a clown for the Shriners, sold Tupperware and was a member of a variety of card clubs, a member of the Eastern Star, Women’s Club, Fairmont Community Church, Exeter United Church of Christ and the Exeter Senior Center. Elva was preceded in death by her parents, husband, John, brother and sister-in-law, Earl and Virginia Meyers, daughter, Mina Ree and daughter and son-in-law, Yvonne and Tim Austin. She is survived by her son, Gary McBride of Exeter, Nebraska, son, Dale (Deniece) McBride of Deland, Florida, 7 grandchildren, 12 great grandchildren, nieces, nephews and many other family and friends.

The family of Elva B. McBride created this Life Tributes page to make it easy to share your memories.

A Funeral Service for Elva will be held on Thursday, October...

Send flowers to the McBride family.