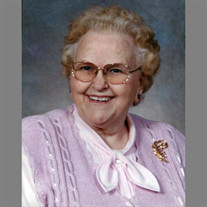 A private family service for Elvina was held on December 7, 2015. Interment will follow in the Geneva Public Cemetery. Memorials are directed to the family for later designation. Elvina Marie Swails, often called Dine, or Vinie, grandma,... View Obituary & Service Information

The family of Elvina M. Swails created this Life Tributes page to make it easy to share your memories.

Send flowers to the Swails family.