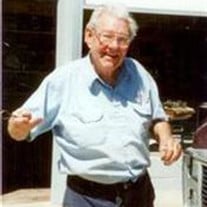 Elwood “Woody” Swails Elwood Roy Swails (Woody to all that knew him) passed away November 9, 2011 at Heritage Crossings, Geneva, Nebraska at the age of 91. He was born August 17, 1920 at Harrisburg, Pennsylvania. Woody’s mother died when he was only twelve and his brother, Robert, was only eight. They went to live with their grandmother, but then sadly they lost her to death when Woody was a junior in high school. Woody then went to work delivering pharmacy supplies to druggists. Woody enlisted in the United States Army Air Force in 1942. He was serving as a parachute rigger and stationed at Fairmont Air Base when he met Elvina Johnson of Sutton. They married on June 17, 1943 at Harrisburg, on a Saturday night. Elvina has shared many memories of those times including the story of her boarding a train all alone and scared, but determined to join Woody in Florida when he was stationed there. She still has a gown her mother made from a silk parachute Woody had sent her while he was serving in Italy, the beautiful workmanship and strength of the silk is apparent, even now after these many years. One of the most touching memories is that of giving birth to their first born child, Eldon Ray, without Woody beside her as he was still serving overseas. He sent lengthy letters and telegrams expressing his concern and sorrow at not being there for their big event. And then the stories of how afraid Eldon was of him when he finally got to come home to them. After his honorable discharge from the military, Elwood and Elvina made their home in Geneva where they were blessed by the births of two more sons, Robert Elwood and James Evens. Woody worked a few jobs including J.C. Pennys and Shaner’s Chevrolet prior to going to work for Standard Oil at a brand new station in Geneva. He bought the station in 1952 and worked there clear up until January 8, 2003 when he suffered a stroke. Since that time Woody resided at Heritage Crossings until his passing. During those years of raising three active boys and running Swails Standard, the family enjoyed several fishing trips to Minnesota and occasional other trips. After their boys were grown Woody and Elvina often travelled to Colorado and even enjoyed a trip to the Bahamas. For their 40th anniversary their sons sent them on a Caribbean cruise – a cruise Woody did not necessarily want go on, but immediately was hoping to go on again! Toward the end of Woody’s active years he loved Sunday afternoon shopping trips. He never seemed to want to stand still for too long. Woody was preceded in death by both of his parents, his brother Robert, several extended family members and many dear friends. Remaining to remember him are his wife Elvina, sons Eldon of Long Beach, California, Bob and wife Connie of Lincoln, Nebraska, and Jim and his wife Linda of Fort Collins, Colorado; four grandchildren and seven great grandchildren. Woody is also survived by a loving niece Clarice Shaw of Grand Island, other extended family and many friends. Included in that group are the loving family at Heritage Crossings – through their kindness and compassion many at Heritage have indeed become like family to both Woody and Elvina. Many thanks go to them and also to the many, many faithful customers of Swails Standard throughout the many years. Woody truly missed them when he could no longer continue at the station. When you think of Woody, please do so in celebration of his life, not in sorrow, as he enjoyed a long and happy life – he lived it to the fullest and for that give thanks to God! Private family Funeral Services for Woody were held on Monday, November 14, 2011 at 10:30 a.m. at the Farmer & Son Funeral Home in Geneva, Nebraska with Pastor Becky Sells officiating. Nancy Jo Galusha accompanied Kris Johanson in the singing of “In The Garden,” “Wind Beneath My Wings,” “I’ll Be Seeing You,” and “How Great Thou Art.” Pallbearers for the service included Eldon Swails, Bob Swails, Connie Swails, Jim Swails, Linda Swails and Daryn Swails. Interment was held in the Geneva Public Cemetery. Memorials are directed to the family.

The family of Elwood R. "Woody" Swails created this Life Tributes page to make it easy to share your memories.