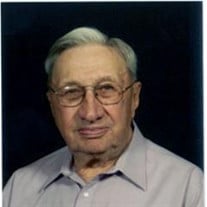 A Memorial Service For Emil will be held on Monday, October 23, 2017 at 10:30 a.m. at the United Methodist Church in Milligan, Nebraska with Kim Dunker officiating. No Visitation - Cremation. Graveside Services will be conducted at the Bohemian National Cemetery in Milligan, Nebraska. Memorials are to be directed to the family for a later designation. Emil Frank Krejdl was born to Frank and Josie (Kassik) Krejdl on April 29, 1922, on a farm southwest of Milligan, Nebraska. He passed away on October 18, 2017, at Fillmore County Hospital in Geneva, Nebraska, at the age of 95 years, 5 months and 19 days. Emil attended school at Milligan Public School until the 4th Grade, and then attended District #2 through the 8th Grade. He graduated from Milligan Public School in 1939. He farmed with his Dad until he was drafted into the U.S. Army during World War II, on September 13,1945. Emil was a Sergeant of the Corps of Military Police at the Army Medical Center (Walter Reed Hospital) in Washington, D.C. He was honorably discharged on May 17, 1947. On November 13, 2016, he was presented with a Quilt of Honor by the Milligan American Legion Post 240. Emil married Darlene Agnes Becwar of Exeter, NE, on September 16, 1947, in Crete, Nebraska. To this union were born two daughters, Connie Lee and Charlene Rae. The couple farmed and lived around Tobias and Milligan all of their life. When first married, they lived on a farm near Tobias, NE, later moving to a farm 1.5 miles southeast of Milligan, NE. In 1981, they built a home in Milligan, NE, where they lived for almost 36 years. Emil retired from farming in 1997. On January 14, 2017, he became a resident of Heritage Crossings in Geneva, NE, where he lived until his death. Emil was a member of the Milligan United Methodist Church, Knights of Columbus, ZCBJ Lodge and the Senior Citizens Club. He served on the Milligan School Board, the ASC Committee and the Milligan Rural Fire Department for many years. He was awarded the Certificate of Merit by the American Red Cross for using his Red Cross Training in First Aid to save a life on December 28, 1961. Emil was a devoted husband, father and grandfather, always looking forward to and enjoying time spent with his daughters, grandchildren and great grandchildren. "Bucko" (as he was known by many) especially loved listening and dancing to Czech music, spending many Saturdays with his wife, Darlene, attending dances in the surrounding area. Enjoying time with friends, playing cards, and having coffee at Elaine’s and Michl's were his favorite pastimes. He was preceded in death by his, wife, Darlene, parents, Frank and Josie Krejdl, his in-laws, Frank and Agnes Becwar, brother-in-laws, George Cruse and Ernest Becwar, and niece, Barbara Nunnenkamp. He is survived by his daughters Connie (Chuck) Stevens, and Charlene (Steve) Friesen of Lincoln, NE; 7 grandchildren Sheila Stevens and Collen Beard of Lincoln, NE; Kelly (Allen), Matsuda of Wellington, Colorado; Kendra (Ryan) Gerlach of Holland, Michigan; Kevin (Krista) Stevens of Lincoln, NE; Jarod Skrivanek of Denver, Colorado; Jeffrey (Carmen) Skrivanek of LaVista, NE; and Tyler Skrivanek of Denver, Colorado; 7 great-grandchildren Chloe and Macy Matsuda, Evan and Chase Gerlach, Treyton and Zachary Stevens and Haley Skrivanek; sister Mildred Cruse of Fairmont,NE; sister-in-law Frances Becwar of Exeter, NE; nephews and their families, Marc Cruse, Larry Becwar and Jack Becwar; and numerous cousins.

A Memorial Service For Emil will be held on Monday, October 23, 2017 at 10:30 a.m. at the United Methodist Church in Milligan, Nebraska with Kim Dunker officiating. No Visitation - Cremation. Graveside Services will be conducted at the Bohemian... View Obituary & Service Information

The family of Emil "Bucko" F. Krejdl created this Life Tributes page to make it easy to share your memories.

A Memorial Service For Emil will be held on Monday, October 23,...

Send flowers to the Krejdl family.