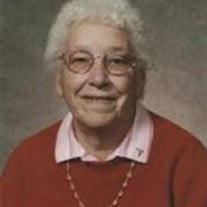 Emma G. (Korensky) Dittmer was born to Albert L. Korensky and Ludmila (Kovar) Korensky on January 31, 1921, at Tobias, Nebraska and passed away on January 19, 2014, at the Good Samaritan Nursing Home in Wood River, Nebraska at the age of 92 years. She was one of 9 children in the family. Emma attended country school District #107 for seven years and then country school District # 94 and graduated from the eighth grade. She didn’t get to go to high school as it was in the 1930’s during the depression. She helped her mother do house work and also helped do field work and herd cows with her father. While living with her parents she lived in many different communities including Tobias, Exeter, Martland and Milligan. When they lived near Geneva she worked for Art and Mildred Sole and many other people in the area. She enjoyed going to Burress to the dances and there she met Dayle Dittmer. Emma was untied in marriage to Dayle E. Dittmer on June 18, 1942 in Hanover, Kansas by Rev. Harder in the Lutheran Church. She was baptized, confirmed and married on the same day. They lived on a farm north of Ohiowa for 42 years. They were blessed with two children a son Richard Dayle and a daughter Janice Gayle. She helped her husband with the fieldwork, raised chickens, ducks and geese and she dressed many of them for other people. Emma liked to bake kolaches and cinnamon rolls and she always had a pot of coffee on to share when someone would stop by. She never complained about a little hard work. She loved her children, grandchildren and great grandchildren and they were her pride and joy. She also had a very special friend, Peanut her dog in which she took much delight in caring for. Emma and Dayle retired and moved to Ohiowa in 1984, and had a farm sale in September of 1987. Dayle died June 19, 1998. They had been married for 56 years. In October 1999 Emma and Janice moved to Shelton, Nebraska to be close to Richard and Sylvia where they made many new friends. On September 23, 2011 Emma’s health failed and she entered the Good Samaritan Nursing Home in Gibbon, Nebraska, and then on October 23, 2011 she went to live at the Good Samaritan Nursing Home in Wood River where she lived until her death. Emma was preceded in death by her parents Albert and Ludmila Korensky, husband Dayle, son Richard, 4 brothers Harry, Jim, Robert and Ben and 3 sisters Mary, Ann and Rose. She is survived by her daughter Janice Dittmer of Shelton, Nebraska, daughter-in-law Sylvia Dittmer of Hastings, Nebraska, grandchildren Allen Dittmer and friend Debra Brundage of Kearney, Linda and husband Jeff Hansen of Hastings, great grandchildren Kimberly and Matthew Hansen of Hastings, sister Helen Kubicek of Exeter, sisters-in-law Merna Korensky of Lincoln, Birdeen Havlicek of Crete, Elaine and husband Brian Wadsworth of Boudurant, IA, nieces, nephews a host of other family and friends and special friends Lonnie Morse, Cam Ripp and Mike Myer. Funeral services for Emma will be Wednesday, January 22, 2014 at 1:30 p.m. at the Grace Lutheran Church rural Ohiowa, Nebraska. Interment will be in the Grace Lutheran Cemetery. Public visitation will begin on Tuesday at 1:00 p.m. until 8:00 p.m. at the Farmer & Son Funeral Home in Geneva, Nebraska. Memorials are to the family for later designation

Emma G. (Korensky) Dittmer was born to Albert L. Korensky and Ludmila (Kovar) Korensky on January 31, 1921, at Tobias, Nebraska and passed away on January 19, 2014, at the Good Samaritan Nursing Home in Wood River, Nebraska at the age of 92... View Obituary & Service Information

The family of Emma G. Dittmer created this Life Tributes page to make it easy to share your memories.