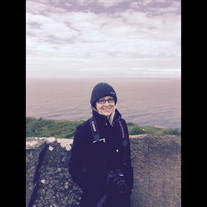 Erin Nicole Rust was born on September 8, 1983, in Grand Island, Nebraska to Dennis Joseph Cannon and Phyllis Elaine (Reiling) Cannon. She passed away on Sunday, May 29, 2016, at her home in Aurora, Nebraska surrounded by her family at the age of 32 years, 8 months, and 21 days. Erin spent her childhood years growing up with her two brothers in the community of Friend, Nebraska. She formed many life-long friendships and memories of her youth. Specific memories that stuck with Erin included serving as a student manager for her dad’s basketball team, countless basketball games in the driveway of the family home, jumping out the tree house into the leaves with her brothers, camping out on the wrap-around porch during rain storms, and riding the go kart that her dad and brothers built. During this time, Erin developed her love of animals, as she was a caretaker to multiple cats that served as family pets. In June of 1994, the family moved to Elgin, Nebraska where her father took the principal position at Pope John Central Catholic High School. While living in Elgin, Erin became active in sports and she enjoyed playing volleyball and especially enjoyed basketball with her dad serving as her coach. She spent her teenage years in Elgin going to drive-in movies, driving around town, and having friends over to talk about life. She graduated from Elgin Pope John Central Catholic in 2002. She continued her education at Southeast Community College in Lincoln, completing general education classes while she decided what she wanted to major in. While living in Lincoln, Erin’s curiosity and love of animals led her to take a job with the Nebraska Animal Medical Center. Ultimately, her tender heart won out, and she found it too hard to watch animals that arrived at the clinic in pain that had to be put to sleep. In 2005, Erin took a position with State Farm Insurance as a Customer Service Assistant. She met many wonderful people while at State Farm and she was very grateful for her State Farm family. Erin also continued her studies through Peru State College graduating in 2008 with a BA in Business Administration. In March of 2008, Erin made the move to Geneva, Nebraska to start a new and exciting journey with the love of her life, CJ Rust. In the words of the Irish, as a ‘Blow-In’ or outsider to Geneva, Erin was grateful to Metal-Tech for her first job in Geneva. After working at Metal-Tech, she was given the opportunity to take a position with Advanced BioEnergy. It was at Advanced BioEnergy that she got her first taste of working in the agronomy field. This soon led to a position as the office manager of the York location of Aurora Cooperative. Erin proved to be an efficient, loyal, and dependable employee for Aurora Cooperative. While at Aurora Coop, Erin found her true calling and she felt both challenged and rewarded. Her latest position at Aurora Coop included a promotion in the offices and a move to the main office in Aurora. It was a promotion that Erin worked hard for and was most proud of with her employment there. Erin felt like Aurora Coop cared about her and CJ as people, not just employees, and she viewed her co-workers as a second family. On August 10, 2010, God blessed Erin with her marriage to CJ Rust. Erin and CJ were inseparable. They enjoyed road trips in the country together, going to two movies in one day, sushi dates, and just spending the day shut-in at home watching movies or ordering take out. It was the simple things in life that fostered their relationship. Erin and CJ also enjoyed traveling together as they made trips to Riviera Mia, Cancun, Cabo San Lucas, the Cayman Islands, Dominican Republic and their favorite destination, Ireland. CJ and Erin were a team and their love for each other was exemplified through the grief and difficulty they shared through Erin’s battle with cancer. Erin’s time with us may have been cut short, but the impression she left on anyone who knew her will never fade away. She faced her battle with dignity and grace, and remained strong in spirit to the end. Erin was preceded in death by her grandparents James and Margaret Cannon; Grandma Ilene Reiling; uncle Mark McCarthy; countless cats and one dog. She is survived by her husband CJ Rust of Aurora, Nebraska; parents Dennis & Phyllis Cannon of Dickinson, North Dakota; brothers and sisters-in-law Denny and Lynae Cannon of Gretna, Nebraska, Shawn and Josie Cannon of Lincoln, Nebraska; father-in-law and mother-in-law Steve and Mary Rust of Geneva, Nebraska; sister-in-law Tiffany Rust of McKinney, Texas; brothers-in-law and sisters-in-law Kyle and Tinera Rust and Marcus and Amy Rust all of Geneva, Nebraska; nieces and nephews Keegan and Kyler Cannon, Allison and Lucas Cannon, Avary, Rylie and Kennedi Davis, Braelynn and Lennon Rust, and Madison, Judson, and Spencer Rust; grandparents Ed and Marge Reiling of Carroll Iowa and Judy Ousey of Geneva, Nebraska; and a host of aunts, uncles, cousins and friends. A Funeral Mass for Erin was held on Wednesday, June 1, 2016 at 10:30 a.m. at the St. Stephen’s Catholic Church in Exeter, Nebraska. Fathers Joe Hannappel and James O’Kane presided over the Mass. Tiffany Rust sang “Sissy’s Song” before the start of the Mass. Agnes Anderson accompanied Mariah Ruhl in the singing of “How Great Thou Art,” “Be Not Afraid,” “I Am The Bread Of Life,” “On Eagles’ Wings,”and “You Are Near.” Pallbearers for the service included Adam Reiling, Andrew Reiling, Gabe Eberhardt, Tyler Brandt, Jason Throener, and Matt Meyers. Interment was held in the Geneva Public Cemetery following the Mass. Farmer & Son Funeral Home conducted the services. Memorials are directed to the family for later designation. Online condolences may be left at www.farmerandsonfuneralhome.com.

Erin Nicole Rust was born on September 8, 1983, in Grand Island, Nebraska to Dennis Joseph Cannon and Phyllis Elaine (Reiling) Cannon. She passed away on Sunday, May 29, 2016, at her home in Aurora, Nebraska surrounded by her family at the... View Obituary & Service Information

The family of Erin N. Rust created this Life Tributes page to make it easy to share your memories.

Send flowers to the Rust family.