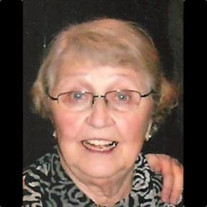 A public Graveside Service was held on Friday, October 9, 2020 at 11:00 a.m. at the Exeter Cemetery in Exeter, Nebraska. Pastor Murry Johnston officiated the service. Memorials are suggested to the Exeter Library. Erma B. Adamson, 93, passed away on October 2, 2020 at her home at Fairview Manor in Fairmont, Nebraska. She was born to Charles and Mary (Remes) Wasserbauer on February 21, 1927 on a farm near Wilber, Nebraska. At the age of 5, Erma’s family moved southwest of Exeter, Nebraska to a farm the family purchased. In 1944, Erma graduated from Exeter Public School then attended Doane College and received a degree in Elementary Education. She taught school in Friend, Nebraska for several years and also worked at First National Bank in Exeter. In 1949, she met Dwight Adamson and they were married on August 25, 1950. This union was blessed with a daughter, Merry Beth, and son, John “Chip” Adamson. Erma was a member of the United Methodist Church and taught Sunday school for 22 years. She was also a substitute teacher for 20 years and served on the Library Board. Outside of education, she belonged to the American Legion Auxiliary and was a volunteer with the Senior Citizen Group. Later in life, she also served as an employee and volunteer at the Exeter Care Center. Erma lived at Fairview Manor in Fairmont, Nebraska for the last years of her life. She enjoyed the caregivers and residents there and visits from many friends in the community. She was preceded in death by her parents; brother Edward; sister Helen; husband Dwight; and daughter Merry Beth Adamson-Strauss. She is survived by her son John “Chip” (Gail); son-in-law Ned Strauss; grandchildren, Ariel Rich, Samuel Adamson, Daniel Adamson; and great-grandchildren Eliana and Gabriel Rich. She is also survived by her sister Char Barker (Jack) and special friends Tyler and Torie Glenn.

A public Graveside Service was held on Friday, October 9, 2020 at 11:00 a.m. at the Exeter Cemetery in Exeter, Nebraska. Pastor Murry Johnston officiated the service. Memorials are suggested to the Exeter Library. Erma B. Adamson, 93,... View Obituary & Service Information

The family of Erma Adamson created this Life Tributes page to make it easy to share your memories.

Send flowers to the Adamson family.