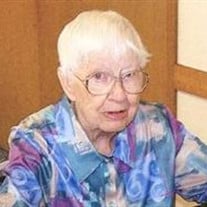 Estella C. (Budler) Perkins, daughter of Anton and Katherine (Steffgen) Budler was born at Geneva, Ne on September 23, 1916, and passed away February 17, 2014. Estella received her education in the rural schools in the Fairmont and Grafton areas and graduated from Geneva Public Schools in 1932. Estella was united in marriage to Cecil E. Perkins on November 22, 1934. To this union was born 3 sons and 2 daughters. They lived in Corvallis, Oregon for 3 years. The rest of their lives have been in Fillmore County, in the Fairmont and Exeter communities. They moved from the farm to their home in Exeter in 1962. Estella helped older people in their homes for several years. She then worked as a Certified Nurse’s Aide for 11 1/2 years at Bethesda Care Center in Exeter. She was a devoted member of St. Stephen's Catholic Church in Exeter. She loved her church, attending daily Mass when possible and saying her daily rosary, an act of faith she and her husband started many years ago. Her greatest pride and joy was her family and home. In 1984, Estella and Cecil celebrated their Golden Wedding Anniversary. Cecil passed away June 29, 1992. Preceding her in death were her husband, Cecil, 2 daughters Shirley and Sheila, daughter-in-law Susan, grandson George, her parents, brothers Wilfred, Clarence, Wayne, Louis and Bernard and her sister Viola Pontine. She leaves to mourn sons Richard of Exeter, Ne, Ronald and Eileen of Lincoln, Ne. and Robert of Lincoln, Ne. Granddaughters Christie and husband Mike Bousselot their children Joseph, Patrick, Alexandria and Thomas; Deb Perkins; Jen and husband Jeff Chartier their children Jayden and Jesse; Becky and husband Jeremy Baumfalk their children Emma, Briella, and Keelyanna; Rhonda and husband Dennis Rogers their son Landon. Grandsons Robb and wife DeAnn their children Colin, Braeden, Madyn, Beckett, and Colston; Rick and wife Kris their children Shelby and Corbin. Sisters-in-law Ruth Rasmussen, Elsie Perkins, many other relatives and friends. Funeral mass was Friday, February 21, 2014 with Father Thomas Kuffel officiating. Agnes Anderson accompanied Jessica Ruhl who sang Amazing Grace, How Great Thou Art, Be Not Afraid, Ave Maria and Song of Farewell. Casket bearers were Jeremy Baumfalk, Rick Perkins, Braeden Perkins, Robb Perkins, Colin Perkins and Corbin Perkins. Interment was in the Holy Cross Cemetery at Grafton, Nebraska. Memorials are directed to the family for later designation. Memorials are directed to the family for later designation in lieu of flowers.

Estella C. (Budler) Perkins, daughter of Anton and Katherine (Steffgen) Budler was born at Geneva, Ne on September 23, 1916, and passed away February 17, 2014. Estella received her education in the rural schools in the Fairmont and Grafton... View Obituary & Service Information

The family of Estella C. Perkins created this Life Tributes page to make it easy to share your memories.

Send flowers to the Perkins family.